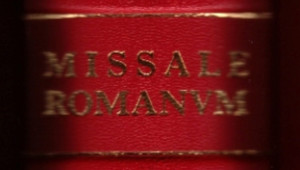 The Association of Catholic Priests has welcomed a new law announced by the Vatican on Saturday which gives bishops’ conferences authority over liturgical translations.

The motu proprio, titled Magnum Principium, announced a change to the Code of Canon Law.

This will decentralise the process for approving translations of liturgical texts and return responsibility to national bishops’ conferences rather than the Vatican.

The announcement follows Pope Francis’ recent statement to Italian liturgists stressing that the liturgical reforms of Vatican II were “irreversible”.

Those dissatisfied with the quality of the latest translation of the English missal, which was introduced in Advent 2011, hope that this new law may result in its revision.

In effect, it means that the bishops will now control liturgical translations, with approval from Rome, the ACP said.

In its statement, the Association, which has over 1,000 Irish priest members, said it had long supported the flexibility to adapt the liturgy to local customs and realities as promised by Vatican II.

It had also campaigned against the latest English translation of the Mass – ‘the New Missal’ – “as a backward step with its lack of inclusive language, ecumenical sensibility and dependence on Rome”.

The group expressed the hope that the Irish bishops would “quickly take this matter in hand, so that Irish Catholics will no longer have to endure the very unsatisfactory translation of the liturgy currently in use”.

In the US, retired bishop of Erie, Pennsylvania, Bishop Donald Trautman described the new law as a “victory for collegiality and a victory for the [Second Vatican] Council Fathers”.

According to NCR, Bishop Trautman, as former chair of the US bishops’ Committee on Liturgy, spearheaded efforts to stop or delay the new missal translations, which he described as “full of grammatical errors and unproclaimable texts”.

The new missal was translated according to Liturgiam Authenticam, issued by the Congregation for Divine Worship and the Discipline of the Sacraments in 2001. This called for a more direct translation from the Latin to vernacular languages.

Before and during its implementation there were complaints that the translation was too literal, with over-long sentences.

In 2014, a survey of clergy views carried out by the Association of Catholic Priests found that four out of five priests want the new translation of the Roman Missal revised or scrapped.

The survey also found that a significant percentage of priests were still using texts from a 1973 missal.

The views of 191 priests, who were randomly selected from the alphabetical listing of clergy in Ireland, showed that 35 per cent of priests favoured replacing the current translation immediately and 45 per cent “as soon as a revised missal becomes available”.

This compared with just a quarter who were either very satisfied (4.7 per cent) or satisfied (19.9 per cent). But even among those who were satisfied, more than half wanted to see a revised missal within a few years.