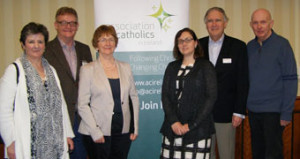 The Association of Catholics in Ireland has expressed its strong support for Bishop Leo O’Reilly of Kilmore’s call for the Irish bishops to set up a commission to study the possibility of ordaining married men to the priesthood as well as appointing female deacons.

In a statement, the lay reform group said Bishop O’Reilly’s proposals reflect elements of its own recent submission to Pope Francis for consideration at the Synod on the Family to be held in Rome this October.

The group warns that the growing shortage of priests needs to be addressed now “as a matter of urgency to ensure access by the faithful to Eucharist in the years ahead”.

The ACI also underlines that the move would be in keeping with the practice of the Eastern Rite Churches where clerics can be married and eliminates the current anomaly of the Ordinariate whereby married Anglican clergy have been accepted into the Catholic Church as ordained priests.

In its submission to Rome for the Synod on the Family, the ACI argued that married clergy would bring the warmth and richness of their lived experience to their pastoral ministry and be well placed to offer support to married couples and families in difficulties.

In addition to ordaining married men, the ACI believes there is a cohort of ordained priests who left active ministry to marry, without seeking laicisation, who could be invited back into ministry right now.

These, it suggests, would bring their experience of marriage to pastoral work while providing extra resources to meet the challenge of the shortage of priests.

The Catholic lay group also recommended in its submission to the Synod that experienced married couples be involved in the training of seminarians for the ministry of marriage and the family.

The ACI says that the high percentage of priests over 65 years of age in Ireland and the low intake of seminarians suggest that in ten years time many parishes will be without a resident priest.

Already the clustering of parishes has resulted in some parishes being without a daily Mass and on selected weekdays only having prayer services without distribution of Holy Communion. This, the Association of Catholics in Ireland says, is upsetting to parishioners, particularly daily Massgoers.

The ACI commend Bishop O’Reilly for initiating the listening process and extensive consultations with his priests and lay members of the church at the recent Kilmore Diocesan Assembly where a key element was seeking realistic solutions to the challenge arising from the decreasing number of priests and from which these radical proposals have emerged.

In their statement, the ACI point out that, in seeking the establishment of a commission, Bishop O’Reilly is reacting positively to the urging of Pope Francis who, speaking about the shortage of priests, said that local bishops are best acquainted with the needs of the faithful and should be courageous and bring concrete suggestions for reform to Rome.

They also point out that the question of celibacy is already being discussed at the  highest levels in the Vatican.

In September 2013, the Vatican Secretary of State, Cardinal Pietro Parolin, said that celibacy is not a dogma of faith and that “it can be debated because it is an ecclesiastical tradition.”

The Association of Catholics in Ireland is committed to the pursuit of a reform and renewal agenda in the Irish Catholic Church in the spirit of Vatican II.

It is committed to helping to re-build, through words and deeds, a united Church based on the teachings of Jesus Christ – a Church that is inclusive, compassionate, accepts the equality of all believers by virtue of their baptism and acknowledges its failures.