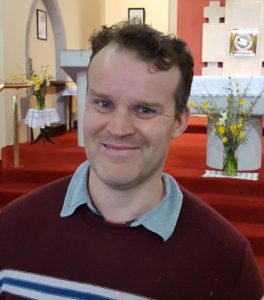 Fergus McCormack 30 years on from his horrific accident

Fergus McCormack, one of a family of six, had an ordinary early childhood, going to school and playing football. But when he was just nine years of age, a traffic accident changed his life inexorably.

Describing the event in poignant terms at Masses in Prosperous last weekend, his words moved people to tears, and when he concluded his account at the 11.30 am Mass on Sunday there was a spontaneous standing ovation.

March 21 2017 marks the 30th anniversary of the accident that so changed Fergus’s life. At the invitation of Fr Bill Kemmy CC, he shared his story after Communion in Prosperous Church last weekend.

“I was knocked down on 21st March 1987,” began Mr McCormack, who walks and speaks with difficulty. “It happened outside our house and at that time my father was serving petrol [across the road] with his back turned in our Maxol station.”

“It should not have happened,” he continued, breathing hard between phrases. “The car was coming. I looked both ways and presumably the car tried to avoid me, but when I heard the brakes I panicked and ran back and I was thrown against a stone pillar.”

The 39-year-old then described how his father rushed across the road to his prostrate son. “My father ran over and comforted my head, before the ambulance came and rushed me to Naas Hospital.”

For five weeks, he lay in a coma and was later transferred to the Richmond Hospital and finally the National Rehabilitation Hospital in Dun Laoghaire.

“I have no memory of my accident or even before it. I was told I just lay there on a beanbag in the rehab, with no head or mouth control. It was weeks until I recognised people, which lead on to better things…”

To prove my critics wrong

To sing my song

To prove my admirers right

And keep my flame alight

To prove that there is a God

For those who believe

I believe in the kingdom to come

And I’ll go on till the end of time

To prove I am a fighter

I am being sincere

Even if I have to fight

I’ll be my old self again.

Fergus, who now drives a car and attends a gym in Naas and the nearby John Sullivan Centre in Clane, said a Dublin physiotherapist had a profound effect on his life and health. In recent times he has begun to share his story with schoolchildren in local schools. He is due to speak to 6th class pupils in Celbridge for Road Safety Week.

The accident which changed his life so dramatically occurred on the main Prosperous–Edenderry road within the village boundary, where the speed limit was 30 mph (now 50 kmph). Despite many calls for ramps in the village, Prosperous remains without traffic calming measures. “We are the only village in Kildare, I believe, that hasn’t got speed ramps,” his father, Séan McCormack, told CatholicIreland.net.