A Nun’s Story is surprise best-seller

The biography of a British aristocrat who gave up debutantes’ ball gowns for nuns’ habits has become a surprise best-seller.

A Nun’s Story is the autobiography of Shirley Leach, aka Sr Agatha, who was once one of Britain’s “most eligible ladies”. In the book she admits that as a teenager she was “an expert flirt”. Her home was Sibton Park, a 23-bedroom mansion in Kent. She had servants, and her life was a succession of dances and parties, tennis matches and pony rides.

She was to give all that up, plus a future husband, to become a member of the Congregation of Jesus, serving in the Bar Convent in York, England’s oldest active convent.

As a member of the British upper classes, Shirley went to boarding school, which she didn’t really like.

“Helpfully, Mummy pulled me out of boarding school after the headmistress wrote to say she was making me head girl,” she writes. “Having a low opinion of her flighty daughter, Mummy had no hesitation in firing back: ‘I cannot believe the standards of Brondesbury have sunk to such a level that my daughter should be propelled to the top of your school, and I am removing her as of immediate effect.’ So I never went back. Instead, with only half an education, I was packed off to a 30-week course in domestic science at a school in the grounds of a convent.”

Her mother, Ximena, was a devout member of the Church of England and asked the young Miss Shirley to read some scripture to her every day when she was at home. Ximena sent her daughter to be trained in cookery by the Catholic nuns because she heard they were strict, and she thought that discipline was what her daughter needed.

However, much to Ximena’s dismay, it was here that the seeds of Shirley’s conversion to the Church of Rome were sown. In the meantime, plans were being made to marry her off to a suitable gentleman. Thus, she was also sent to a finishing school where she was “taught how to curtsy and hold a glass of champagne so it didn’t get warm — essential skills for a debutante”. 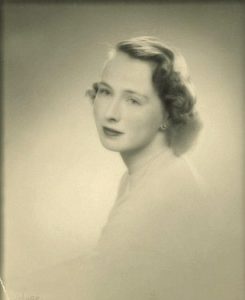 “My mother was determined to see at least one of her daughters presented to His Majesty. I was to be presented, packaged up, sold to the world of wealth and privilege and, even more importantly, to the cache of suitors seeking the hand of a rich young lady who was rapidly growing up,” she writes in her autobiography, where she doesn’t seem too impressed by her meeting with King George VI, mainly because he wore too much make up.

There were plans to send her to Oxford or Cambridge, but in the meantime she met Jeremy Chittenden, who also had her sense of fun: “Before going to the Dublin Horse Show, he bought a red hat from Dunhill’s and then walked about, introducing himself as the Peruvian ambassador — complete with a swaggering bow and false Spanish accent.”

At the age of 18, she converted to Catholicism, and the following year she became engaged to Jeremy and they planned to marry in October 1952. As was the practice in the pre-electronic era, the two wrote to each other “constantly”, or more accurately several times a day.

It was while she was writing one of these letters, discussing plans to furnish their future home, that she received the call in a most dramatic way.“‘Should I leave a bid for the chairs at the local auction?’ I wrote to him on my pale blue notepaper. Then I paused to consider what to say next. That’s when it happened. Suddenly, my right hand started moving across the paper of its own volition, as though my thoughts were being controlled by an outside force.

“‘But there seems no point now as I am to be a nun,’ I wrote. I stared, appalled, at the words – still wet with ink. The message could not have been clearer, though it had never even crossed my mind to become a nun. In that instant, everything changed. It was as if I’d removed my sunglasses on a gloomy day and seen the world in sharp perspective for the first time.”

This is reflected in the full title of the book, published on 5 January: A Nun’s Story – The deeply moving true story of giving up a life of love and luxury in a single irresistible moment.

After joining the Congregation of Jesus, and taking the name Sr Agatha, she eventually became head of the Bar Convent, which she modernised by adding a museum, a café and guest accommodation. Today, the convent guestrooms are reckoned to be one of Britain’s best B&B establishments, but for a while the expensive developments threatened the convent with closure as a result of bankruptcy.

Happily, providence came to the rescue. Sr Agatha told her story to a man she met on a train and he introduced her to the American multi-millionaire John Paul Getty, who financed the convent’s rescue plan.

Now aged 85, Sr Agatha lives in a part of the Bar Convent reserved for retired sisters. 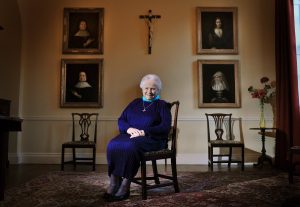 Sr Agatha today at the Bar Convent in York

At present, the publisher John Blake Books has no copies of the book available to order, but there are a few copies available on Amazon, where it is currently the number one selling religious biography.

See www.bar-convent.org.uk for more information on the Bar Convent.

Tags: A Nun’s Story – The Deeply Moving True Story of Giving Up a Life of Love and Luxury in a Single Irresistible Moment, Biography, call, nun, posh, Vocation, York