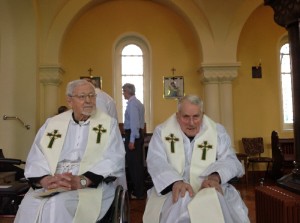 (r) Fr Dan Fitzgerald (Cork) and (l) Fr Fred Hanson (Belfast) who this year celebrate 75 years of Ordination. This was a first for the Missionary Society of St Columban which will celebrate its centenary in 2018.

Columban missionary, Fr Dan Fitzgerald, who will celebrate the 75th anniversary of his ordination in December, is a direct link with the Irish missionary order’s founder, Bishop Edward Galvin.

It is a link he continually returns to when he is asked to recall his days on the Chinese mission.

“My great privilege, and I thank the Lord for it, is that I was with him (Bishop Galvin) for the six years I was in China,” he says, and then tells of his first meeting with a man many believe should be considered for canonisation.

“The three of us (who had just arrived in Hanyang diocese) were sent up to him. As it was to be our first meal with him we put on these white suits we had kept for that meeting.”

“Then he appeared, the perspiration rolling down his face, wearing an old Chinese shirt and only that he had a Bishop’s ring on his finger he could have been anyone but a Bishop.”

“He offered us a drink and then he said, ‘why have you got those things on you? Take off that jacket, you’ll melt.’ So we had our first meal with our Bishop in our shirtsleeves. He was a very humble man.”

Fr Dan, who was born in Cork City in 1916, was educated by the Christian Brothers, and in St Columban’s, Dalgan Park (then sited in Co Galway), before he was ordained at Christmas in 1939.

Explaining his vocation, he says, “My parents were daily Mass-goers and we had the Rosary at night. They gave us an outlook that the things of this world were not as important as the things of the next.” Two of the three boys became priests.

After completing his theological studies, Fr Dan’s first assignment was to the Philippines in September 1940, but War broke out and attempts to travel met with no success.

Eventually he was given a temporary appointment in the Cork diocese as chaplain to the Maria Reparatrix nuns.

Towards the end of the War, he was assigned to Nottingham diocese, before finally his opportunity to go on the missions arrived in the summer of 1946.

Ten places had been secured on a troop transport to Hong Kong, and Fr Dan was accompanied by four Columban priests and five Columban Sisters.

They travelled on a coaster to Shanghai, where the Sisters were allocated to a school. Fr Dan and two other priests were assigned to the Diocese of Hanyang.

“The only way of getting to that part of China was by the Yangtse river,” he recalls, “and the three of us went up the river on a US Navy landing craft.”

Arriving in July 1946, first impressions were of the heat and the mosquitos.

“By modern standards, China was quite undeveloped. There was no road in the whole diocese, no railway, so it was the river, if it was going in the right direction, or walk. The diocese was roughly the size of Munster, with a population between five and six million, and only one per cent were Catholic.”

“It was like going back a couple of centuries. Living conditions were pretty primitive. You felt the men who had gone before you must have had great courage and great zeal, especially because of the troubled conditions that existed in that part of China between 1920 and 1946.”

A civil war in 1926 had been followed by attacks by roving bandits, then in 1932 there was a great flood, which had most of the diocese under water, and that was followed in 1936 by the Japanese invasion.

“You had to see the hand of God in all this or it makes no sense,” says Fr Dan. “Bishop Galvin told me that you can only plan for normality ‘and since I came here I have never had five consecutive normal years.’ And still he kept going.”

“He had a wonderful way of identifying the work with the work of Our Lord. ‘The pattern will never change,’ he told me, ‘it’s the public life, followed by Calvary.’ I learned a lot about the Bishop before trouble came, and a lot more when trouble came.”

When Mao Tse-tung’s Red Army took over in 1949, bit by bit they confiscated the diocesan property. Again Bishop Galvin proved equal to the loss of his life’s work.

“Coming away after they had taken over the last place,” Fr Dan recalls, “the Bishop said ‘isn’t it lonely work losing all you had?’ I said, ‘Well, it’s tough on everyone but particularly on yourself who started it,’ and he replied: ‘What else would you expect? What had He (pointing to the crucifix) at the end? The apostles ran away, and only a couple of women and one of the apostles stayed’.”

“He was able to see the meaning of suffering and apparent failure. It’s God’s way of doing things and you have to take it on faith. St Paul puts it well: ‘Faith is the evidence that appears not’.”

Expelled from China in 1952, Fr Dan retains a great love for the Chinese.

“They were like sheep without a shepherd,” he says. “They had come to the conclusion that there was a power greater than man, but they had no idea who or what it was. They believed in life after death but what it was they didn’t know. We knew there were a whole lot of answers to those questions and we had them, but they had no one to tell them.”

“It’s good to know that living conditions have improved, but I hope that it won’t have the effect of making them more materialistic in their outlook. I hope that material prosperity won’t deprive them of their spiritual values. They always had devotion to family and parents and for each other.”

Since Fr Dan left China, a lot has changed in that country.

The persecution of the Church has switched to a toleration of the externals, but how deep that goes is hard to gauge. For an understanding of the situation, Fr Dan recommends a study of the letter Pope Benedict wrote to Chinese Catholics in May 2007.