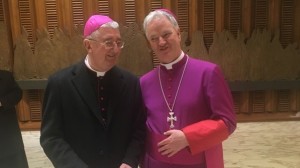 Irish priest, Mgr Paul Tighe, on Saturday was consecrated a bishop in a ceremony in Rome presided over by Cardinal Pietro Parolin, the Vatican’s Secretary of State.

Among those con-celebrating the Mass in St Peter’s Basilica was Archbishop Diarmuid Martin of Dublin.

In a statement on Saturday on behalf of the Bishops’ Conference, Archbishop Eamon Martin, Primate of All Ireland offered his good wishes to the new bishop “as he prepares to take on his new, important and challenging ministry”.

“As well as being a day of new beginnings, this is also a very happy time for Bishop Tighe’s family members, friends, fellow priests and colleagues,” Archbishop Martin said,

The Primate of All Ireland highlighted that Bishop Tighe brings to his new role a wealth of pastoral experience as a lecturer in moral theology, a parish chaplain, director of the Communications and Public Affairs Office of the Archdiocese of Dublin and, more recently, as Secretary of the Pontifical Council for Social Communications.

“Bishop Tighe possesses many gifts including a strong pastoral outlook, a fine theological mind and is a communicator par excellence.”

He recalled Bishop Tighe’s keynote address ‘The Church in a Digital World – Sharing The Good News’ last November in Maynooth on the occasion of the 40th anniversary of the Catholic Communications Office.

“I am confident that he will do excellent work in his new role as Adjunct Secretary of the Pontifical Council for Culture,” he said.

Archbishop Diarmuid Martin and several priests from the archdiocese of Dublin con-celebrated the Mass for the episcopal ordination and many friends and members of Bishop Tighe’s family travelled to Rome for the occasion.

Paying tribute to the newly ordained bishop, Archbishop Martin said he was “a person of kindness and integrity, whose contribution to life of the Universal Church, particularly in social communications, was widely respected”.

He said that together with the priests of Dublin he wished him every blessing in his ministry in the years to come and assured him of their prayers.