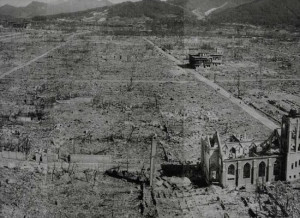 The Mayor of Hiroshima on Thursday called for the abolition of all nuclear weapons as the people of his city and elsewhere across the world marked the 70th anniversary of the bombing of Hiroshima and Nagasaki in August 1945.

At 8.15am, the exact time the first nuclear bomb exploded on 6 August 1945, thousands of people stood for a moment’s silence in Hiroshima as the Peace Bell rang and hundreds of doves were released into the sky.

In his address, Mayor Kazumi Matsui called for the creation of security systems that do not rely on military might.

The atomic bomb, the single most destructive weapon ever unleashed upon human beings and the environment, was dropped by an American B-29 bomber on Hiroshima, killing approximately 70,000 people instantly.

A further 70,000 died subsequently from their burns, radiation poisoning or other related causes.

On 9 August 1945 the bombing of Nagasaki followed which killed another 40,000 instantly.

Hiroshima signalled not only the first use of atomic weapons in warfare but also the beginning of the Nuclear Age.

Estimates suggest that over $6 trillion has been spent on nuclear weaponry since. Nine countries possess more than 17,000 nuclear weapons.

Trident, the UK weapons programme, is eight times more powerful than the atomic bomb that was dropped on Hiroshima.

Pat Gaffney, General Secretary of Pax Christi in the UK, said on Thursday, “This is an ideal time to engage people in thinking about the reality of nuclear weapons today. Tragically, they have not been confined to the history books: they are still with us and as Christians we should be doing all we can to ensure that our Government does not renew its commitment to Trident, Britain’s nuclear weapons programme, in 2016.”

He added, “Pope Francis has reminded us that spending on nuclear weapons squanders the wealth of nations and that resources would be better invested in the areas of integral human development and the fight against poverty.”

In August 1945, catholic chaplain to the 509th Composite Group, Fr George Zabelka blessed the crews and their two missions to Japan.

In a 1980 interview with Sojourners magazine, Fr Zabelka said, “I was ‘brainwashed’! It never entered my mind to publicly protest the consequences of these massive air raids.”

Elsewhere in the interview he explained, “I was told the raids was necessary; told openly by the military and told implicitly by my Church’s leadership. To the best of my knowledge no American cardinals or bishops were opposing these mass air raids. Silence in such matters, especially by a public body like the American bishops, is a stamp of approval.”

He continued, “Look, I am a Catholic priest. In August of 1945, I did not say to the boys on Tinian, ‘You cannot follow Christ and drop those bombs.’ But this same failure on the part of priests, pastors and bishops over the past 1700 years is, I believe, what is significantly responsible for Hiroshima and Nagasaki and for the seemingly unceasing ‘Christian’ blood-letting around the globe.”

“It seems to me that Christians have been slaughtering each other, as well as non-Christians, for the past 1700 years, in large part because their priests, pastors and bishops have simply not told them that violence and homicide are incompatible with the teachings of Jesus.”

Fr Zabelka’s went from being a proponent of the just war theory to a total pacifist and in a 1975 Christmas letter to friends, he stated, “I must do an about face. … I have come to the conclusion that the truth of the Gospel is that Jesus was nonviolent and taught nonviolence as his way.”

He dedicated the rest of his life to teaching, preaching and witnessing to Gospel nonviolence. He died in 1992.

Among those who witnessed the atomic bomb which dropped on Hiroshima 70 years ago was an Irish nun, Sr Julia Canny.

Originally from Clonbur, Co Galway, Sr Julia was a late vocation having spent most of her adult life in the United States.

She was in the grounds of the convent of the Society of the Helpers of the Holy Souls in Hiroshima saying her morning prayers just two kilometres from where the bomb dropped on August 6th, 1945.

“Suddenly there was a huge bang in the sky, just above the city,” she recalled later. “We were all thrown from our seats onto the ground. Realising that it was a bomb, we quickly picked ourselves up and made a run for cover in the direction of the convent.

“We had only just taken shelter inside the convent when the entire building began to shake and give way. We turned and rushed outside again, the convent collapsing at our heels. The convent wall collapsed before our very eyes and beyond where the wall had stood until a few seconds before lay the remains of our neighbourhood.

“There was hardly a building left standing. Everywhere people lay either dying or dead, burned — I was to learn later — from the flash of radiation.”

Though tens of thousands of Hiroshima residents were to perish from radiation sickness after the bomb, Sr Julia lived to the age of 94 and died in Toyko in 1987.