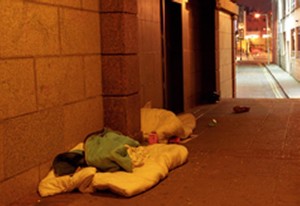 The agency said this will bring the number of homeless families in Dublin alone to 450 families over the first 11 months of this year.

According to Focus Ireland almost 1,000 children in these families have experienced homelessness in 2014.

Director of Advocacy at Focus Ireland Mike Allen said in a statement on Tuesday, “We need firm action by the Government to stop this crisis not excuses.”

Focus Ireland is calling on the Government to raise rent supplement payments and increase rent regulation immediately to stem the flow of families and individuals into homeless.

Mike Allen said he was very concerned that only last week the Tanaiste & Minister for Social Protection, Joan Burton, again ruled out introducing rent controls to address the growing problem of rising rents.

Minister Burton was speaking after figures from the Private Residential Tenancies Board showed the cost of renting a home in Dublin has risen by almost 10% over the past year while nationally, rents are 5.6% higher.

“The Tanaiste claimed there were constitutional issues attached to introducing rent controls. Focus Ireland does not believe this to be the case,” Mike Allen said and he referred to the All Party Oireachtas Committee on the Constitution which said there was no constitutional impediment.

The agency is calling on the Government to introduce tax changes for landlords so it is feasible for them to rent.

“The Government must take these steps to provide a more secure private rented sector as a short-term strategy to tackle the growing homeless and housing crisis,” Mike Allen warned.

“We have seen positive action from Minister Alan Kelly to put in place a €2.2 billion social housing strategy along with moves to ensure 50% allocation of social homes to people who are homeless or at risk over the next 6 months.”

He added, “We need the same urgency and commitment to those experiencing homelessness from the Tánaiste as we see from Minister Kelly. We are well beyond the point where legal excuses to camouflage inaction are acceptable.”

According to Focus Ireland, many are forced to live in shocking conditions with many families packed into tiny hotel rooms.

The charity also supports many singles and couples who are homeless or at risk of losing their homes through its support services and specific prevention work.