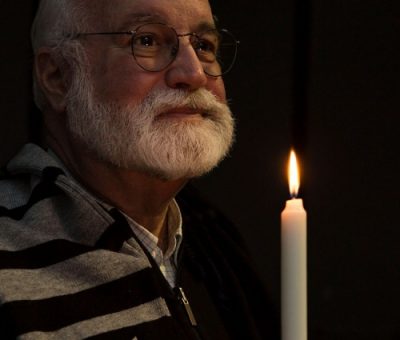 Against the current political stalemate in Northern Ireland, the 4 Corners Festival 2019, with the theme “Scandalous Forgiveness”, is encouraging a culture of encounter and forgiveness, according to one of the founders of the festival, Fr Martin Magill.

“It is bringing people together and encouraging them to move from their own area into another area – to get to know new people,” he told catholicireland.net. The festival, now in its seventh year, runs from 30 January to 10 February.

On Tuesday evening singer songwriter Brian Houston sang and shared his experiences of 25 years of composing music about “Belfast, love, God and Justice” with the co-founder of the festival, Presbyterian Minister Steve Stockman.

The event took place in Fr Magill’s west Belfast Catholic parish church, St John’s. “The majority of those present were from the Protestant community who had come from way outside the city to hear a singer songwriter who grew up as Protestant,” said Fr Magill. “For some people it was probably the first time they had been in west Belfast and perhaps the first time in a Catholic church. We are breaking new ground.”

Commenting on the same event, Maria Rosa Logozzo from Focolare, who was in the audience that night, said the festival was different this year. “It is something that is beginning to put people together and help give them a common identity, one which they have not discovered yet”. An example of this was when, towards the end of his concert, Brian Houston spoke of the value of the Irish language to “maintain the identity and culture of Irish people and he isn’t a Republican. That was beautiful,” she said.

A highlight of this year’s festival was a session entitled “Compassion, Radical Kinship and Forgiveness” at the Skainos Centre (Methodist Mission) in east Belfast on Sunday, where Fr Gregory Boyle SJ spoke of his experience of three decades of working with men and women caught up in gang warfare in Los Angeles. Fr Boyle is founder of Homeboy Industries, the largest gang intervention rehabilitation and re-entry programme in the world.

Fr Boyle has buried 227 victims of gang warfare in LA since 1988, the last just 2 weeks ago. Homeboy Industries has a turnover of $20m a year and a throughput of 15,000 ex gang members – women and men – for whom it provides work over an 18-month period. If there is “no kinship, there is no peace. No kinship, no justice. No kinship, no equality,” said Fr Boyle. The session also included the testimonies of ex gang members, who are now senior managers in Homeboy Industries.

At the age of 17, Steve Avalos was jailed for life for taking part in gang murder. Seventeen years later he was released into the care of Homeboy Industries after the intervention of Fr Boyle. Gang warfare was “a way of life” in his family and his community, he said. “My life was messed up. Fr Greg has saved my mother’s life, my brother’s life and my children’s life. None of my kids will go into gangs.”

Hector Verdugo said he “was born into a world of chaos”. Violence was always happening, including domestic violence leaving an ugly stain on his memory. “There was something I was lacking all my life. It was love. And I found it in this therapeutic community [in Home Industries]. It was love, true love. Finally, I cracked and cried.”

A novelty of the festival this year was the involvement of schools. In a sporting event, “A game of three halves”, around 100 children aged from 8 to 16 rotated for half-hour periods between rugby, gaelic football, soccer and basketball, with inputs in between exploring the concept of forgiveness. Last night more than 40 children from 8 primary schools across Belfast acted out short plays about forgiveness involving the public, in a packed Stranmilles Drama Theatre.  At the end, each person present was asked to write the name of a person to be forgiven, to make a ball with the paper and launch it towards the stage as a sign that the person was forgiven. People were advised they could also forgive themselves.

Today there will be a “Learning Lunch” at Fitzroy Presbyterian Church and tonight the screening of Guardians of the Flame on the role of forgiveness. Contributors to the film include Alan McBride, whose wife and father-in-law died in the Shankill bombing; Eugene Reavey, whose three brothers were killed in the Whitecross shootings; and Beryl Quigley, whose husband was shot by the IRA. The film will be followed by a panel discussion.

On Saturday a group will take a “Wonderful Wander” from west to north Belfast with poetry along the way. The festival concludes on Sunday night at Clonard monastery, with a review of the theme of “Scandalous forgiveness”. “We will ask ourselves, what would it be like for Belfast to become a forgiving city?” said Fr Martin Magill.