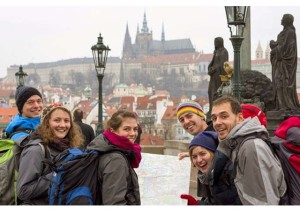 Tens of thousands of young people from Europe and around the world who arrived in the Czech capital Prague by bus, train, plane or hitchhiking are taking part in the annual international Taizé gathering.

Churches in the historic centre of Prague opened their doors for midday prayer on Tuesday and Wednesday as a gesture of welcome.

In each of them, the young pilgrims found a Taizé cross painted specially in recent weeks by a team of artists directed by Matej Forman.

Five prayer places have set up at the Letňany Exhibition Centre for evening prayers from including a tent which had to be added because of the large number of participants registered.

Representatives of the Council of Czech Churches will participate in the prayer from 1 January at 7pm in St Vitus cathedral, which will be broadcast live by Czech television.

On Wednesday, evening prayer was broadcast live from Hall 4 at the Exhibition Centre.

On 30 November 2014, the last morning of his apostolic trip to Turkey, Pope Francis mentioned Taizé when he spoke of the search for full communion among the Churches.

He said, “It is precisely the young who today implore us to make progress towards full communion. I think for example of the many Orthodox, Catholic and Protestant youth who come together at meetings organized by the Taizé Community.” 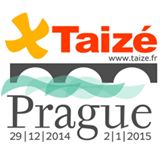 In a message this week to the Prague gathering, Pope Francis said he was praying for the success of the Taizé Community’s ecumenical meeting.

In a message to young people from around the globe gathered in the capital of the Czech Republic, Vatican Secretary of State Cardinal Pietro Parolin said that through prayer and reciprocal dialogue, they are attempting to be “the salt of the earth” and the Pope encourages them in their efforts towards greater communion.

He reassured them that as they strive for this goal, they should not be overwhelmed by their “limitations and their poverty.”

Pope Francis recalled in his message that the Czech Republic is celebrating the 25th anniversary of its “return to democracy” and invited young people in Prague to remember in their prayers the men and women martyrs who “sometimes at the cost of great suffering” gave freely of themselves so that their country would regain its freedom.

Pope Francis also called young people to imitate the willingness of the Virgin Mary to open themselves to God’s plan and said he is confident that with imagination and creativity, they will spread the word of the Gospel in their own countries.

He called them “travellers of the faith” and said it is wonderful that young people are “happy to bring Jesus to every street, to every square, to every corner of the earth!”