26 terminations under new abortion law in 2014 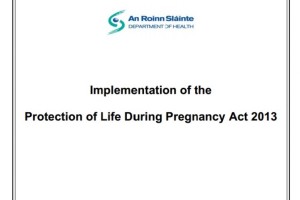 Figures released by the Minister for Health show that 26 terminations took place under the terms of the Protection of Life During Pregnancy Bill, three of which were carried out when mother’s life deemed at risk due to suicidal ideation.

The report from the Health Service Executive was presented to the the Oireachtas by Minister Leo Varadkar.

It detailed the number of terminations under the 2013 abortion Act from 1 January to 31 December 2014.

Minister Varadkar said the Government was happy that the legislation was working in the way it was intended to.

Responding to the figures, the Pro Life Campaign said the loss of even one baby’s life is “an immense human tragedy” and added that the Government was aware there is no medical evidence showing abortion is a treatment for suicidal feelings.

PLC Deputy Chairperson, Cora Sherlock said that even though the Government and Minister Varadkar were “fully aware that abortion is not a treatment for suicidal feelings”, they had still pressed ahead with legislation in 2013 providing for abortion on this ground.

She accused the Government of ignoring the expert evidence from two sets of Oireachtas hearings which showed that, far from being a medical treatment, abortion in the case of threatened suicide can have long term negative consequences for women.

Cora Sherlock added, “It is a very sad fact that the Government’s legislation in 2013 is directly responsible for the loss of life in the cases where three babies had their lives ended under the ‘threat of suicide’ ground for abortion.”

“It is difficult to determine from the information made available today whether the deaths of the other 23 babies under the new Act resulted from induced abortion that directly targeted their lives or whether some or all of them resulted from necessary medical interventions in pregnancy to save the life of the mother where every reasonable effort was also made to save the life of the unborn child.”

Ms Sherlock said, “Under the new legislation the Government deliberately blurred the distinction between necessary medical interventions and induced abortion. But what is not at issue is that three babies under the new abortion Act had their lived ended without a shred of medical evidence to suggest abortion on this ground would safeguard the life of the mother.”

“Pro-life groups never claimed that the new law would lead to abortion on demand overnight. We stand by the claim we made in 2013 that over time the new law, unless it is repealed, will normalise the practice of abortion in Ireland and undermine the dignity and inherent value of every human life.”

Separately, Northern Ireland pro-life activist and founder of Precious Life, Bernadette Smyth, has won her appeal against a conviction which said she was guilty of harassing a former Marie Stopes clinic director.

The judge ruled there was insufficient evidence that she pursued a campaign against Ms Purvis.