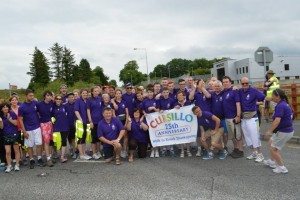 Hundreds of Cursillo pilgrims will arrive on foot in Knock later today having walked from Derry, Belfast, Dublin and Cork to be there.

The annual Cursillo camino takes place over five days and has peace as its theme.

During the week, Bishop Donal McKeown of Derry celebrated Mass in Termonbacca before blessing the 170 pilgrims from his diocese as they set out on their 132 mile trek.

Cursillo is a lay movement which originated on the Spanish island of Majorca and came to Ireland in the 1960s.

The word ‘cursillo’ is Spanish for short course.

The movement was set up by laymen in the mid 1940s by a group of young men who recognised that, following World War II, there was a need to bring people, especially men, back to the Church and to renew and recharge the faith of those who still attended.

They recognised that there was an urgent need to re-Christianise a world that was slipping further from the teachings of Christ.

After extensive study and a lot of prayer, they devised a a course on how to live as a Christian with all the difficult realities of modern life.