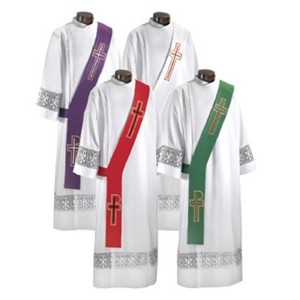 The 2013-2014 annual survey of permanent deacons in the United States finds the majority are married Caucasians, and the number at retirement age is on the increase. The survey also finds that U.S. permanent deacons reflect a greater ethnic mix than U.S. priests in general but less of a mix than the general Catholic population.

The findings are outlined in “A Portrait of the Permanent Diaconate: A Study for the U.S. Conference of Catholic Bishops 2013-2014.” The study was conducted by the Georgetown University-based Center for Applied Research in the Apostolate.

“Ever since their inception into the modern church in the 1960’s, permanent deacons have served generously in our parishes, institutions and communities and remain special gifts to the Church,” said Bishop Michael F. Burbidge, chairman of the Committee on Clergy, Consecrated Life and Vocations.

“As their median age increases, we must take necessary steps to invite others to hear the Lord’s call to serve as deacons.”

Major findings from arch/dioceses that responded to the survey note the following:

• Ninety-three percent of active deacons are currently married. Four percent are widowers, and two percent have never been married. Less than one percent are divorced or remarried.

• Dioceses have mandatory ages of retirement from active ministry for deacons. Twelve percent require retirement at age 70; 85 percent at 75, and three percent at another age.

• Active permanent deacons are more diverse racially and ethnically than U.S. priests, although not as diverse as the U.S. Catholic population.

• Six in ten active deacons (60 percent) have at least a college degree. More than one tenth (11 percent) have a graduate degree in a field related to religion or ministry.

• Twelve permanent deacons were reported to have left the diaconate to prepare for the priesthood.

Tags: 'One of Us, Invocation, Permanent Diaconate, US, Vocations