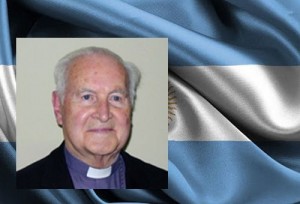 A 100-year-old Argentinean prelate, who is one of the oldest bishops in the world, has strong connections with Ireland it has emerged.

He was born in Buenos Aires in July 1913, the fourth of eight children. His parents were Irish emigrants from the Midlands.

Bishop Leaden was educated by the Salesians, the order founded by St Don Bosco. In a recent interview, he said he felt a desire to be a priest when he was in the 6th grade at Pius IX School.

“When I was done, I went to the seminary, and when I finished philosophy, I went to Cordoba for theology, and I was ordained a priest” on 23 November 1941, he explained.

In 1975, Pope Paul VI appointed him auxiliary bishop of the capital city, Buenos Aires, and he was consecrated on 8 August that year.

He served as an auxiliary in Buenos Aires until 1992. He offered his resignation in 1988 when he turned 75 but it was not accepted until four years later when he was 78.

His brother, Alfredo, was also ordained a priest, but was killed in tragic circumstances.

He was one of three priests and two seminarians murdered in what has become known as the San Patricio Church Massacre at Belgrano in Buenos Aires in 1976.

Fr Alfredo spent part of his training for the priesthood in Thurles, Co Tipperary.

The three priests and two seminarians murdered at San Patricio all belonged to the Pallottine order.

The victims were priests Alfredo Leaden, Alfredo Kelly, and Pedro Duffau and the seminarians were Salvador Barbeito and Emilio Barletti.

Gunmen, believed to be from a military unit, stormed into San Patricio church after midnight on 4 July 1976 and shot the three priests and two seminarians dead.

It was the bloodiest single act of violence against the Catholic Church during Argentina’s brutal right wing dictatorship.

Church officials in Argentina are now working to have the five declared saints and Pope Francis is one of those who promoted their cause from the earliest stage as Archbishop of Buenos Aires.

The superior general of the Pallottine fathers in Argentina, Bishop Seamus Freeman, confirmed in an RTE Radio interview earlier this year that with the support of Pope Francis, the cause for their beatification has begun.

Pope Francis had been close to Fr Kelly and acted as his spiritual director and heard his confessions. He formally approved the sainthood investigation in 2005.

Speaking on the 25th anniversary of the massacre, he said in his memorial homily, “I am a witness, because I was with Alfie in his spiritual guidance, in his confession, until his death. He only thought of God. And I name him because I am a witness to his heart, and when I mention him, I mention all of them.”

In all, 18 priests, 11 seminarians and about 50 Catholic lay workers were killed or ‘disappeared’ as death squads sought to eliminate left-leaning activists during Argentina’s ‘dirty war.’

He has written that he was born into “a traditional Irish family of deep religious vocation”.

According to Michael Duffy of Mullingar, Bishop Leaden has visited the area several times in the past. “The last time he came with his brother, Paddy, a retired Gaucho, but that was about 18 years ago.”

In an interview with CNA/EWTN News, the prelate said Our Lady had helped him “in many small things” and was with him at every moment in his pastoral ministry.

He also has a special devotion to St Don Bosco, his patron. “I try to imitate him as much as possible,” Bishop Leaden said.

Asked about the priesthood, the Bishop encouraged seminarians to “keep their lives on the path of fidelity to the Church. In my view that is the most important thing.”

Priests should live a private life that is appropriate to their calling, he suggested, adding that “the Eucharist is a very important activity” in the life every priest.

Asked about Pope Francis, who was Archbishop of Buenos Aires before his election to the See of Peter, Bishop Leaden said simply, “Bergoglio is a holy man.”