Summary: Conversion of Paul, Apostle. This date Jan 25th, first linked with the conversion of Saint Paul in the so-called Martyrdom of Jerome (c. 431), became established in the liturgy of Gaul. Celebrates the work of God’s grace at a major turning point in the life of Paul himself and in the history of the infant Church.

Patrick Duffy recalls his conversion and his career as an apostle.

St Paul is known as the apostles of the Gentiles.
Most of what we know about Paul comes from the Acts of the Apostles and from the letters he wrote to the communities he had evangelised or was in contact with.

He was a native of Tarsus in Cilicia (present-day south-east Turkey) and he trained as a Jewish rabbi under the distinguished teacher Gamaliel, probably in Jerusalem. He also learned the trade of tent-maker and was a Roman citizen. 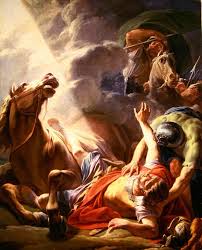 On his way from Jerusalem to Damascus in a campaign to stamp out the Christian movement, Paul was thrown from his horse (<<image left) is from St Paul’s Missionary Seminary, Gwagwalada, Abuja, Nigeria) and had a sudden and radical conversion experience. This caused him to withdraw to Arabia for three years. He returned to Damascus, where he received instruction from the Christians he had gone there to harm. He then went briefly to Jerusalem to meet with Peter and James. This gave him initial recognition and he went back for some time to his home town of Tarsus.

Paul then moved to Antioch in Syria from where he and Barnabas went to Cyprus and Asia Minor on a missionary journey (Acts 13-14). It was as a result of their experience on this journey that the controversy arose about having Gentiles circumcised on their conversion to Christianity. Paul maintained there was no need for this and refused to have Titus, who was a Gentile, circumcised. The issue was finally resolved at the Council of Jerusalem, with a decision not to impose circumcision on Gentile converts (Acts 15).

Third missionary  journey
The third journey would have brought Paul again through Galatia to Ephesus and Troas and again into Greece passing back via Ephesus to Jerusalem (Acts 18:23-21:26).

Journey to Rome
It was at Jerusalem that some Jews from Asia Minor saw Paul and stirred up the crowd against him so that the Roman soldiers had to take him into protective custody. They brought him to the Roman governor Felix at Caesarea. Here he was kept for two years, until a new governor, Festus, took over. When the Jews again pressed Festus, who was inclined to favour the Jews, for Paul to be brought to Jerusalem, Paul appealed to Caesar and so was put aboard a ship to Rome. After shipwreck in Malta, they eventually reached Rome where he seems to have lived for some time – possibly up to two years – under house arrest (Acts 21:27-end). He may at this time have gone back to the churches in Greece and Asia Minor or even to Spain. 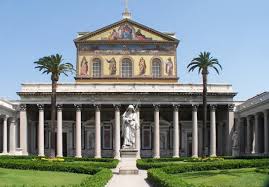 Execution and death
The events surrounding Paul’s death are uncertain. Kept under house arrest and then released, the tradition is that he was eventually beheaded at Tre Fontane in 64 or 65 AD near where the Basilica of St Paul outside the Walls in Rome now stands.

In 2006, Vatican archaeologists discovered a sarcophagus believed to be his under the altar in the basilica, further investigations are pending.

These radical views gave Paul a standing and a boldness that enabled him to stand up to and correct even Peter when he was, as Paul said, “manifestly in the wrong” (pussyfooting with exclusivism – Galatians 2:1-14) and to bring his mission through Asia Minor, Greece and Rome.

He deserves his title: “Apostle of the Gentiles”.