Summary and Homily for the Chinese Martyrs: This is a slightly abbreviated version of a homily delivered by Father Li on October 29th. 2000 in the Cathedral of the Immaculate Conception, Hong Kong, to mark the canonisation of one hundred and twenty Chinese martyrs on October 1st. Father Li is still active as a curate in St Margaret’s Parish, Hong Kong. Father 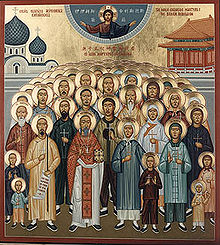 The Chinese Martyrs
‘If the world hates you, realise that it has hated me before you. If they persecuted me, they will persecute you also’ (Jn 15:18-20). The Church always grows in the midst of persecution. The blood of martyrs is the seed of Christians. This is why the Church in China has been growing.

Honoured and happy
I feel very honoured to be able to give testimony about the martyrs in my own family and home town. They were really martyrs for the faith. I am happy also because the Chinese government gave so much publicity to the event. This caused everyone in Hong Kong, and throughout the world, to be aware that the Catholic Church was organising a canonization ceremony. Curiosity was aroused among those who heard the news, and they asked questions like: What is a canonisation? Who are being canonised? Why are they being canonised? And why are people opposed to their canonisation?

Marytyrdom
Martyrdom means to witness to one’s faith and even to sacrifice one’s life for it. For example, during the Boxer Revolution of 100 years ago, if you had been ordered to support the Qing Dynasty government and you were killed for not doing so, this would not be looked upon as martyrdom. However, the Boxers ordered the missionaries and the Christians to renounce their faith. They were killed because they refused to do so. This is called martyrdom.

During the persecutions in the year 1900, in Shanxi Province, the names of 2,418 Christians were reported to the Vatican as having given their lives for their faith. In Taiyuan City 69 persons were martyred for the Lord. Of these, only 26 were canonised last year on October 1st. The 69 martyrs gave their lives on three different days: July 9th, 12th and 14th. Two lay women died on July 12th, and 39 Catholics died on July 14th. Among them were my grandfather, Li Zhongyi, and an uncle, Li Shiyan. Three more were seriously wounded, including my father, Li Shiheng.

What follows is the testimony of the experiences of my mother and my father at that time.

Mother’s Testimony
My mother reported:
‘At about four o’clock on the afternoon of July 9th, just as we were reciting our prayers, we suddenly heard beautiful music coming from the heavens. We had never heard such music before. Suddenly, we saw an orderly row of large white banners coming towards us from Taiyuan City. When the banners passed over our heads the music got louder and more pleasant to the ear. Everyone clasped their hands on their hearts and knelt down. We began to encourage one another, and to think that this was surely a sign that the bishops and priests had already given their lives for their faith.

‘Sure enough, the next day a band of soldiers came to our place, and announced that the bishops and others had been killed. Then we all thought that the time had arrived for us to give up our lives for our faith. We all began to prepare ourselves by continuously reciting prayers.

‘After a little while a soldier shouted at us: Do you deny your religion or not? Not a sound was heard in response. The soldier then shouted an order that two of the older Christian women should be strung up in the garden. He did this to arouse a fear of death in the hearts of the younger women. The two older women were not in the least afraid. They continually encouraged the younger ones, saying, Young ladies, don’t be afraid; now the gate of heaven is open; quickly prepare yourselves to ascend into heaven!

‘On July 12th. some officials returned, and tried to frighten us into denying our faith. Again they were met with dead silence. ‘Then the officials took down the two older women, who had been strung up, and brought them outside. In a little while they brought in two bowls of blood, and told us that it was the blood of the two women whom they had killed. They did not kill us, but sent us back to the Church.’

Father’s Testimony
My father’s report:
‘On July 14th, Yuxian, the Governor of Shanxi Province, issued an order: All male Christians who are not willing to deny their faith must gather near the North Gate. When the Catholics heard this order they became very excited, and their hearts were filled with joy. They all began marching towards the appointed place. On the way they supported and encouraged one another. My grandfather was one of these fervent Catholics. As soon as he heard the order, he said to my fifteen-year-old father and my uncle, Let’s go. We are going to heaven today! Li then said goodbye to his family and began walking towards the place of martyrdom. From their home to the appointed place was only about a twenty-minute walk, but they had to pass through some winding streets.

‘When they arrived at the place of martyrdom, many Catholics had already gathered there. Most people knew one another. The place was not very large and the Christians were many. Each one was barely able to find space for himself. Everyone knelt down in a very composed manner and they began to recite their favourite prayers.

Helping the executioner
‘According to the custom of the time, the men wore the pigtail. To make it easier for the executioner to kill them, each one brought the pigtail forward over their heads and held it in front of them with their hands. They also bent their backs forward and stretched their necks out as far as they could so that there was enough room for the sword to strike them cleanly.

‘They waited for over three hours in the morning, but there was no sign of the executioners. The Christians began to become agitated. Was it possible they would be denied the crown of martyrdom? Then, about noon, a band of executioners, led by some soldiers, arrived at the place. The volume of the Christians’ prayers grew louder. And they stretched their necks even straighter.

‘At the sound of the command, Kill, the executioners began swinging their swords wildly.

Narrow escape
‘My grandfather and my uncle were kneeling along the path of the square. Their heads were swiftly and cleanly severed from their bodies. It so happened that my father was kneeling next to a large rock. Therefore, when the sword came down, most of it struck the rock, and it only cut open some flesh on his neck. His throat was not damaged. ‘Because the Christians were many, the executioners did not pay close attention as to whether the heads of everyone had been separated from their bodies. In this way my father was denied the privilege of seeing God face to face, as my grandfather and uncle did.

‘The swordsmen had executed only about 10% of the Christians when the commander gave the order to stop the killing. The soldiers and executioners began to return to their barracks. The Catholics who had survived were very disappointed. They blocked the executioners’ withdrawal, beseeching them to kill them also. But nothing could be done. The order had already been given. The executioners would not wield their swords again. The Christians fell into each other’s arms weeping.
‘My grandfather and my uncle were among the 39 martyred for the faith that day.

‘My father was wounded, but survived. He would later recall, When the sword of the executioner came down upon my neck, the only thing I felt was the coldness of it. Then I lapsed into unconsciousness. I lay in a pool of blood for two days and two nights. I do not know how much blood I lost.

Good Samaritan
‘On the morning of the third day, i.e. July 16th, a non-Christian was passing by and he noticed a slight movement among the corpses. He went closer and saw that it was someone he knew. Then he heard my father whisper, I am thirsty.

‘Then this goodhearted man, realising that he had lost a lot of blood, took some rainwater from a puddle in a piece of broken crockery and, drop by drop, poured it onto his lips. He then ran to my grandmother to report that her son was still alive. She brought him to live temporarily in another village located about ten miles from the city.

‘No medicine was applied to my father’s wound, nor did the family have any money for injections or to buy pills. My grandmother just entrusted my father to God’s care. God will arrange everything, she thought. Miraculously the wound closed and became completely healed. Later when my father narrated the story of his near-martyrdom to others, he always said: From the time I received my wound up until it was completely healed, I never felt any pain. Doesn’t that prove that God is always with me?’

Conclusion
Hearing about the experiences of the martyr-saints causes us to feel that what Saint Paul wrote was right: ‘No creature will be able to separate us from the love of God in Christ Jesus Our Lord’ (Romans 8:39). Through the intercession of the martyr-saints of China, let us ask the Lord to help us to follow their example and to witness to the Gospel in our daily lives by loving God and loving others.
May God bless you!

Postscript
The above article is a slightly abbreviated version of a homily delivered by Father Li on October 29th. 2000 in the Cathedral of the Immaculate Conception, Hong Kong, to mark the canonisation of a hundred and twenty Chinese martyrs on October 1st.

We are indebted to Father Peter Barry MM who translated Father Li’s homily into English.
The Editor.

This article first appeared in The Messenger (May 2001), a publication of the Irish Jesuits.