Mar 25 – The Annunciation of the Lord

Summary of the Feast of the Annunciation to Mary
This feast originated in the East during the sixth century and gained universal observance in the West during the eighth century. It is a feast of the Lord, commemorating the announcement to the Virgin Mary of the Word made flesh, Mary’s acceptance of God’s will, and the conception of Christ nine months before Christmas. Its occurrence close to Easter links the incarnation with the whole mystery of human redemption in Christ. 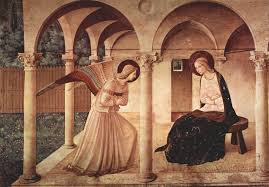 Denise Levertov (1923-97) was born in Ilford, Essex, England. Her mother was Welsh; her father was a Russian Hassidic Jew, who immigrated to England from Germany and after converting to Christianity, became an Anglican parson. Denise worked as a civilian nurse during the Blitz and in 1947 married an American writer Mitchell Goodman and from then on lived in the USA where her son Nikolai was born. She was influenced by the transcendentalism of Ralph Waldo Emerson and Henry David Thoreau. She taught in the University of Washington and held a professorship at Stanford University in California. Resistance to the Vietnam war, to prejudice, to injustice and support for feminism were themes of her poetry. Her conversion to Christianity in 1984 was a big influence on her religious writing. She became a Roman Catholic in the last decade of her life. Annunciation, from the collection “A Door in the Hive” (1989), is inspired by a compelling line from the 6th century Akathisthos (sung while standing reverently – akathisthos literally means “not sitting down”) Hymn of the Orthodox Liturgy in praise of the Theotokos (Mother of God).

Hail, space for the uncontained God!
(from the Akathistos Hymn, Greece, VIc)

We know the scene: the room, variously furnished,
almost always a lectern, a book; always
the tall lily.
Arrived on solemn grandeur of great wings,
the angelic ambassador, standing or hovering,
whom she acknowledges, a guest.

But we are told of meek obedience. No one mentions
courage.
The engendering Spirit
did not enter her without consent.
God waited.

She was free
to accept or to refuse, choice
integral to humanness.

Aren’t there annunciations
of one sort or another
in most lives?
Some unwillingly
undertake great destinies,
enact them in sullen pride,
uncomprehending.
More often
those moments
when roads of light and storm
open from darkness in a man or woman,
are turned away from
in dread, in a wave of weakness, in despair
and with relief.
Ordinary lives continue.
God does not smite them.
But the gates close, the pathway vanishes.

She had been a child who played, ate, slept
like any other child – but unlike others,
wept only for pity, laughed
in joy not triumph.
Compassion and intelligence
fused in her, indivisible.

Called to a destiny more momentous
than any in all of Time,
she did not quail,
only asked
a simple, ‘How can this be?’
and gravely, courteously,
took to heart the angel’s reply,
perceiving instantly
the astounding ministry she was offered:

to bear in her womb
Infinite weight and lightness; to carry
in hidden, finite inwardness,
nine months of Eternity; to contain
in slender vase of being,
the sum of power –
in narrow flesh,
the sum of light.
Then bring to birth,
push out into air, a Man-child
needing, like any other,
milk and love –

but who was God.

This was the minute no one speaks of,
when she could still refuse.

She did not cry, “I cannot, I am not worthy,”
nor “I have not the strength.”
She did not submit with gritted teeth,
raging, coerced.
Bravest of all humans,
consent illumined her.
The room filled with its light,
the lily glowed in it,
and the iridescent wings.
Consent,
courage unparalleled,
opened her utterly.