Summary: St Vincent Ferrer was born in  Spain in 1350. His  father was english and his mother spanish. Vincent joined the Dominicans. He became a great preacher and predictor of event. Remembered chiefly for preaching repentance on his missions throughout France He helped bring about an end to the three popes schism. He died at Vannes in 1419 and was buried there.
*************

A Spanish Dominican, Vincent’s authority as a teacher and preacher seems to have been supported by miracles. Associated with anti-pope Pedro de Luna (called Benedict XIII) at Avignon, he later withdrew his support.

Successful Dominican preacher
Vincent’s father, William Stewart Ferrer, was an Englishman who married a Spanish woman Costanza Miguel and settled in Spain. Vincent joined the Dominicans and at twenty-one was teaching philosophy at the university of the Catalan city of Lleida. Ordained in 1374, he taught in Barcelona and then studied theology and Hebrew at Toledo. He was successful in converting Jews to Catholicism, including Solomon Ha-Levi, who later went on to become Bishop of Cartagena and then Archbishop of Burgos.

Predictor of the future
While studying at Barcelona and only in Deacons orders he was bidden to preach. Famine and plague were raging. The ships sent from Flanders with corn had not arrived and the people were in despair. Vincent organized a procession, and in the Place del Boru preached to some 20,000 persons. The spirit of prophecy came upon him and he foretold that before nightfall the overdue ships should arrive. When he returned to the Convent it was to meet with a severe reprimand from the Prior, who bade him leave aside such predictions for the future. But that night a crowd of people rushed to the Convent, exultant, delirious with joy : the corn-laden ships had arrived and Vincent s prophecy was fulfilled. 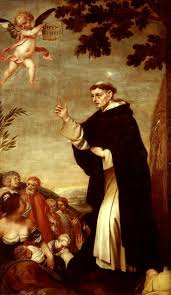 During the confusion of the Great Schism (1378-1417), Vincent became an associate of Cardinal Pedro de Luna who became Avignonese pope as Benedict XIII (also called Papa de Luna). But when Vincent became aware that de Luna was hindering attempts at a solution, he left Avignon to work as a missionary preacher in France, Spain and Italy. In 1416 Vincent withdrew his support for Pedro de Luna and persuaded King Ferdinand of Arragon to do likewise, thus paving the way for the election of Pope Martin V at the Council of Constance (1417). 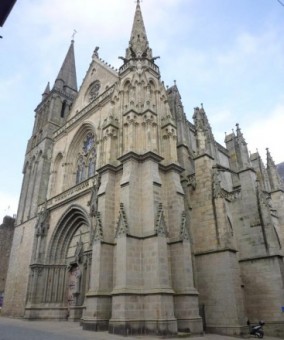 Many were moved by Vincent’s preaching to change their lives. Some entered La Grande Chartreuse where his brother was prior. In his later life Vincent moved his missionary preaching to Normandy and Brittany. He died at Vannes in 1419 and was buried at the cathedral there.

St. Vincent  is the patron saint of builders because of his fame for “building up” and strengthening the Church: through his preaching and  missionary work.