Summary of St Thomas Moore: Pope John Paul II proclaimed Thomas More as patron of statesmen and politicians. Along with St John Fisher, the only English bishop not to capitulate to King Henry VIII’s demands, we celebrate his feast on 23rd June. 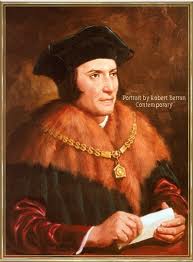 Thomas More (1478-1535) was an English lawyer, writer and politician. Born in London, he studied law at Oxford and entered the English Parliament in 1504.  He married Jane Holt and they had four children. Like his friend Erasmus of Rotterdam, he was renowned as a humanist scholar.  He coined the word ‘utopia’, the name – it can mean either “good place” or “no place”! – given to an ideal imaginary island whose political system he described in a book of that title in 1516. When Henry VIII became king, he sought Thomas as his advisor and he became Chancellor of England in 1529.  In 1530 he refused to sign a letter asking the Pope to annul Henry’s marriage to Catherine of Arragon and resigned in 1532. He now had neither job nor income, but both he and Bishop John Fisher of Rochester refused to acknowledge Henry as Supreme Head of the Church of England. This eventually led to their execution in 1535.  Both were canonised in 1935. During the Jubilee Year 2000 Pope John Paul II declared St Thomas More patron of lawyers, statesmen and politicians.

Support
In the course of his address Pope John Paul II said: ‘At the beginning of the new century and new millennium, those responsible for public life are being faced with demanding responsibilities. It is precisely with this in mind that I have wished to offer you the support of a special patron, the martyr Saint Thomas More.

‘Thomas More’s life is truly an example for you who are called to serve humanity and society in the civic and political sphere. The eloquent testimony which he bore is as timely as ever at a historical moment which presents crucial challenges to everyone involved in governing.

‘As a statesman he always placed himself at the service of the person, especially the weak and the poor. Honour and wealth had no sway over him, guided as he was by an outstanding sense of fairness. Above all, he never compromised his conscience, even to the point of making the supreme sacrifice so as not to disregard its voice. Invoke him, follow him, imitate him! His intercession will not fail – even in the most difficult situations – to bring you strength, goodnaturedness, patience and perseverance.’ 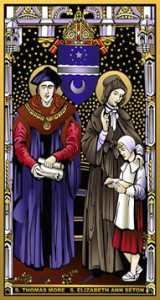 Pope John Paul II strongly affirms the noble calling of Christians to serve in the sphere of politics and lawmaking and goes on to say that for a faithful living out of their calling as public servants Christians need to be clear about their convictions if they are to have the courage to live by them.

Thomas More is a model of someone who based his choices on Christian principles. One of his best known statements is: ‘When a statesman forsakes his own private conscience for the sake of his public duty he leads his country by a short road to chaos.’

This is the wisdom of a man who knew how to put loyalty to God in first place. This is the conviction of a man who was a servant of his people but God’s servant first. For Thomas had the wisdom to understand that if our relationship with God is distorted then our relationship with people can’t be right. He knew that if a nation is to have good laws those laws begin from respect for the law of God.

Respect for life
On this point Pope John Paul II says, ‘A law that does not respect the right to life from conception to the natural death of every human being, whatever his or her condition – healthy or ill, still in the embryonic stage, elderly or close to death – is not a law in harmony with the divine plan. Christian legislators may neither contribute to the formulation of such a law nor may they approve it in parliamentary assembly.’ This offers a clear guideline for lawgivers as they respond to new scientific discoveries in the areas of biology and genetics. Consequently, legislators have to remember that human life is a gift of God to be respected, never an object to be exploited for the sake of short-term needs.

Jubilee Day
A second event from the Jubilee Year is significant for helping us to understand what the Pope invites us to do in our prayers of intercession. On November 4th, 2000, a Jubilee Day for Members of Parliament and Government Leaders, the Holy Father recalled a statement of Pope Paul VI in which he stressed that ‘politics is a demanding way of living the Christian commitment to serve others‘. He went on to call on Christians who are engaged in politics to act selflessly, to work for the good of one and all, especially for the less fortunate members of society. 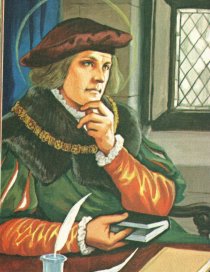 Justice
As part of that appeal he invited leaders to make some gesture of clemency to prisoners during the Jubilee Year, one that would encourage them on the path of conversion and give them an incentive to sincerely accept the values of justice. He went on to say that justice must be the fundamental concern of political leaders and legislators, a justice which aims at creating conditions of equal opportunity among people. True justice builds solidarity; it fosters good relationships and it is inclusive. ‘Peace is the fruit of justice,’ he says. The justice which brings peace serves to oppose all violence against human life at every stage of its development. In working for justice the tasks of politics and lawmaking are to formulate and approve laws that promote the real good of every person. To fulfil their responsibilities to God, the sole master of human life, legislators need wisdom.

Prudence
In a pluralistic society Christian lawmakers are sometimes faced with requests for legislation that run contrary to the dictates of their own conscience. New scientific discoveries in the fields of genetics and biology are posing complex problems for them. Lawmakers need Christian prudence to enable them to be faithful to the demands of their correctly formed conscience and at the same time to carry out their duties as legislators. They are called on to witness to their own faith and to be faithful to their own principles in the ever new situations which they face. 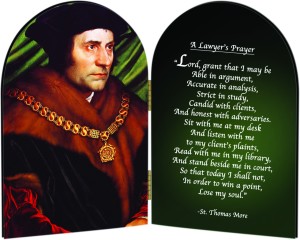 Prayer
If our legislators are to make the Gospel of Christ their guide and be effective as a leaven in society they need our support and our prayer. The Holy Father is asking us to intercede for them so that, guided by the wisdom that God is master of all of life, their work may be fruitful as they seek to build a just future, a future where the world will continue to be civilized more and more by love.

This article first appeared in The Messenger (August 2001), a publication of the Irish Jesuits.