Summary of St Thomas Becket, Bishop, Martyr. Born in London (England) in 1118, died as archbishop of Canterbury, murdered in his own cathedral on this day in 1170. Already a deacon when he was appointed chancellor of England, he became a close friend of Henry II. His ordination as bishop brought an abrupt conversion of life and led him to oppose the king over the rights of the Church,  careless words from the king inspired four knights to assassinate him. He was immediately acknowledged as a martyr and for his Christian convictions. 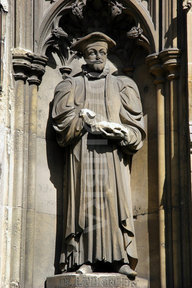 Thomas Becket, archbishop of Canterbury, was assassinated by four barons of King Henry II in his cathedral  on 29th December 1170. Previously (1155-62) Becket had been chancellor to the king, but when Henry had him made archbishop, he insisted that the king respect the rights of the Church. This resulted in a long stand-off between the two that eventually led to Becket’s martyrdom.

Early life and education
Thomas Becket was born of Norman ancestry in c.1118 in Cheapside, London. His father Gilbert was a petty knight and textile merchant. Thomas learned to ride a horse, hunt, behave like a gentleman, and engage in popular sports such as jousting at the estate in Sussex of one of his father’s rich friends. He received a brilliant education in civil and canon law at Merton Priory in England, and then overseas at Paris, Bologna, and Auxerre.

Chancellor to the King
Upon returning to England, Theobald, Archbishop of Canterbury, made him Archdeacon of Canterbury and entrusted him with important missions to Rome. When the important office of Lord Chancellor became vacant in 1155, Theobald recommended Thomas to King Henry II for the post. King Henry wanted to be absolute ruler of his dominions, both Church and State, and Thomas helped him strengthen his authority through taxes exacted from all landowners, including churches and bishoprics. This did not make Thomas popular among English Churchmen. 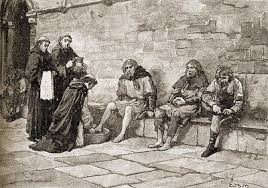 But when Archbishop Theobald died in 1162, Henry had Thomas made archbishop, intending through this appointment to further his influence. But at this time Becket underwent a kind of conversion experience. He became more ascetic in his habits even washing the feet of beggers  and more assertive of the interests of the Church. When Becket gave up the chancellorship and consolidated the land revenues of Canterbury under his own control, a rift opened between Henry and himself, followed by a series of legal conflicts, such as the jurisdiction of secular courts over English clergy.

The Clarendon Constitutions 1164
Henry sought less clerical independence and a weaker connection with Rome at an assembly at Clarendon Palace on 30th January 1164. In this he was successful and while Becket agreed, he did not formally sign the documents. This led to open conflict. Henry summoned Becket to a council at Northampton Castle on 8th October 1164 to answer allegations of contempt of royal authority and wrongdoing while Lord Chancellor. Convicted of the charges, Becket left the trial and fled to the continent, where King Louis VII of France gave him protection. He spent nearly two years in the Cistercian abbey of Pontigny, until Henry’s threats obliged him to move again.

A stand-off
Becket sought to exercise the prerogatives of the Church, particularly the weapons of excommunication and interdict. But Pope Alexander III, while sympathetic to him in theory, favoured a more diplomatic approach. Becket’s firmness seemed about to be rewarded when in 1170 the Pope was on the point of excommunicating Henry. Alarmed by this prospect, Henry held out hopes of an agreement that would allow Thomas to return to his see at Canterbury. 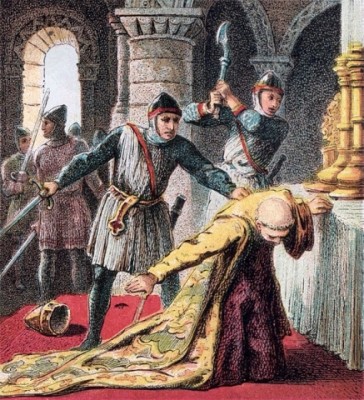 Assassination
This was interpreted as a royal command, and four knights set out for Canterbury where they arrived on 29th December 1170. They knights informed Becket he was to go to Winchester to give an account of his actions, but when he refused, they retrieved their weapons from where they left them outside and put him to death as he went for Vespers. The leadup and the assassination are the subject of T.S. Eliot’s drama Murder in the Cathedral.

A place of pilgrimage and Henry’s public penance
Following his death, the monks prepared his body for burial. It was discovered that Becket had worn a hairshirt under his archbishop’s garments – a sign of penance. Soon after this, the faithful throughout Europe began venerating Becket as a martyr, and in 1173 – barely three years after his death – he was canonised by Pope Alexander III in St. Peter’s Church in Segni. On 12th July 1174, in the midst of the Revolt of 1173–1174, Henry humbled himself with public penance at Becket’s tomb, which from then became one of the most popular pilgrimage sites in England.