Summary: St Thomas Aquinas, Priest, Doctor of the Church. Born near Aquino (Italy) about 1225; Educated at Monte Cassino, Naples, Paris, and Cologne, he became a Dominican in 1244 and died on his way to the Council of Lyons in 1274. He is regarded as one of the greatest theologians in the history of the Church. Despite ecclesiastical opposition at the time, the substance of his life’s work has endured as an authentic exposition of Christian teaching and carries unique official approval. He was recognised for his modesty, the prayerfulness of his personal life, and the abiding influence of his thought, patron of catholic schools, colleges and universities. But he is also invoked for protection against lightening, since, once when he was a young boy, his baby sister was killed by a bolt in a storm. 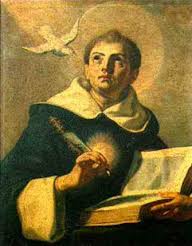 Thomas was born of aristocratic parents at the castle of his father Count Landulf at Rocca Secca near the Roman municipium of Aquinum, also the birthplace of the Roman poet Juvenal. His mother Countess Theodora was related to the Hohenstaufen dynasty of the Roman Emperor. His father’s brother Sinibaldo was abbot of the nearby Benedictine monastery of Monte Cassino. At five Thomas was sent there for his education with the hope perhaps that he might become the abbot there like his uncle. At sixteen he went to the University of Naples where he became interested in the Dominican friars. When his brothers heard he wished to become a Dominican, they held him captive at one of their castles and even brought a woman to tempt him, but he persisted and in the end his now widowed mother allowed him go back to the Dominicans.

Cologne and Paris (1244-59)
The Dominicans soon sent him to Cologne where Albertus Magnus (Albert the Great (1200-1280) was lecturing in philosophy and theology. Thomas accompanied him to Paris. Here he graduated and became a master in theology in 1252. He was ordained a priest at Cologne. This was the time when the works of Aristotle with commentaries by the Islamic scholars Avicenna and Averrhoes were debated at Paris. Where others feared Aristotle as a “pagan”, Aquinas valued his enquiring mind, the power of his reasoning and always referred to him very respectfully as “the philosopher”.

At this time too, persuaded by fellow Dominican Raymund of Peñafort to help to confute the teaching of the Moors and Jews in Spain, Thomas began writing the Summa contra Gentes. It is a treatise that  moves from truths known from natural reason, such as creation, to truths of Christian revelation, centering on the person of Jesus. 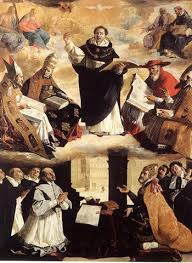 Thomas in Italy (1259-69)
Thomas was called to Italy in 1259 and for ten years taught at and organised schools of the Dominican order in Orvieto, Viterbo and Rome. After completing the Summa contra Gentes in 1264, he began his life’s most important work, the Summa Theologica, which is a comprehensive explanation of the Christian faith, the moral life and the sacraments. In 1264 at the request of Pope Urban IV, he composed the Office and Mass for the new feast of Corpus Christi. This included the famous eucharistic hymns Adoro te devote, Verbum supernum, Lauda Sion Salvatorem and Pange lingua gloriosi (eucharistic version).

Friendship with King (Saint) Louis (1269-72)
In 1269 Thomas returned to Paris for three years, lecturing at the university of Paris and frequently a guest at the table of King (St) Louis IX. Once while dining with the King, he became absorbed in thought. Suddenly he banged on the table with his fist, shouting: “That finishes the heresy of the Manichees!”. After this outburst he was rebuked by his prior and Thomas’s secretary was ushered in quickly to write down his argument! 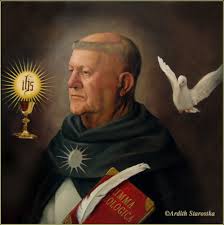 In 1272 Thomas was recalled to Italy to be regent of studies for the Dominicans in Naples. It was here on 6th December that he had a vision during Mass that caused him to stop work on the Summa Theologica and declare: “All that I have written seems to me like so much straw compared with what I have seen and what has been revealed to me.”

Death and influence
In January 12Death and influence
I74 Pope Gregory X called him to attend the Second Council of Lyon where he hoped to re-unite the Eastern Church with the West. Thomas, though unwell, set out, but suffered a stroke en route and died at the Cistercian monastery of Fossanuova.

P.S. Thomas’s written output is enormous. See www.corpusthomisticum.org. The Council of Trent placed his Summa Theologica on the altar beside the Bible; a less dynamic Thomistic system dominated Catholic theology between Trent and Vatican II. His philosophy, especially his Five ways towards the existence of God and his ethical teaching on the virtues, have been influential in the Western philosophical tradition.

He is regarded as the patron of Catholic universities, colleges, and schools.