Summary: St Teresa of Jesus, Virgin, Doctor of the Church. Born at Avila (Spain) in 1515; died at Alba de Tormes in 1582. Honoured as a spiritual writer and mystic who experienced and comprehensively described the life of prayer. She was honoured as a strong, practical reformer who restored the strict Carmelite observance of poverty, solitude, and prayer. 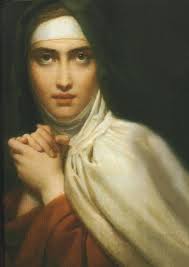 Eugene McCaffrey OCD looks at how St Teresa of Avila harnessed the enormous power of her personality and made it available for the greater glory of God.

Teresa of Avila was born in Holy Week in the year 1515. She died in October 1582, just over four hundred years ago. Her life and her achievements have earned her many titles – reformer, writer, foundress, doctor of the church and saint – and these, together with her warm human personality, her wit and her single-minded courage, have made her one of the great women of all ages.

Teresa was not a born saint.
Her strong, vibrant personality yielded only gradually to the powerful workings of God’s grace in her life. She was a woman of immense desires, rugged determination and generous spirit. She had a gift for friendship and an ability to please. She loved life and all things human and was not afraid either of her own weakness or her own strength. It is hardly any wonder that she has become one of the most endearing of all Christian saints and the most approachable of the mystics.

Explorer and reformer
Teresa lived in an age not at all unlike our own; an age of exploration and discovery, an age of revolution and reform and one of religious and political upheaval. Twenty years before she was born Christopher Columbus discovered America and the thrill and excitement of this ‘new world’ was very much part of the climate of sixteenth century Spain. In her own way, Teresa was an explorer, too, but of a different kind. Her world was the world of the spirit, that intimate abode of love and friendship where God and the human soul meet and converse. While Columbus died without ever realising what it was he had discovered, Teresa became ever more fully aware of the treasures and riches of the kingdom within – the ‘interior castle’ which she encountered on her ‘way of perfection’.

Two years after Teresa was born, Martin Luther, a German Augustinian friar, lit the fire of the Protestant Reformation which, within the space of a single generation swept across Europe with unprecedented religious and political consequences. The sixteenth century became an age of revolt and reform to which Teresa was not immune, nor did she wish to be: her revolt and her reform were of a different kind.

Though she understood Luther’s passion for reform, she did not share his vision of how this was to be achieved. She experienced, as he did, the reality of sin and evil and the weakness of human nature, but she knew also God’s mercy and the transforming power of his grace. She knew, too, that the only revolt was against the sin and evil in her own heart and that reform, wherever it ultimately ended, had to begin from within. Teresa’s answer to Luther was not the chilled statements of the Council of Trent, but the witness of her own grace-filled soul, so powerfully portrayed in her writings and in her life.

A conciliar age
Like ourselves, Teresa lived in the age of a great council. The Council of Trent opened in 1545 and continued intermittently till 1563. These years correspond to one of the most crucial periods in Teresa’s life – her own interior struggle to surrender herself whole-heartedly to God and her exterior struggle to begin the Carmelite Reform (with the foundation of St Joseph’s in Avila). It is not difficult to discern in God’s providence the profound relationship between the work of Trent and the efforts of Teresa.

The object of the Council of Trent was not simply to counteract the Protestant Reformation, but to renew the life of the Church, externally through its doctrines and decrees, and internally through a thorough-going programme of Christian renewal. Teresa’s object was the reform, first and foremost, of her own life, and then of one particular religious family within the Church.

Teresa understood prayer and contemplation only in terms of ‘service of the Church’. She was in every way a daughter of the Church. She strove with all her might to implement the spirit of the great Council by the reform of the one particular religious family under her care, her whole aim being to support, strengthen and build-up the Body of Christ in whatever way this was possible for her. Not without reason, then, has she been called the ‘Saint of Trent.’

On eagle’s wings
If Teresa was not a born saint she seems to have been a born writer. Despite all her protests about her inability to write, and despite her reluctance to do so – she wrote, for the most part under obedience – she seems to have belonged to that privileged few who are truly original and creative writers. Endowed with a keen intelligence and a creative imagination, she had that feeling for life and insight into people and events that is the essential characteristic of all great writers. Above all else she was rich in human qualities – compassion, humour and a sanctified common sense – that enabled her to express human as well as divine truths in a language that was clear, colloquial and unaffected. And it is this human and universal quality that has endeared her to so many readers down through the centuries.

With some writers it is possible to separate their teaching from their personality; not so with St Teresa: all her books radiate her presence. To read her writings is to come to know the person. Practically every page bears the impress of her forceful and vivid personality. The reason is simple – she wrote solely out of her own experience. Indeed the unique validity of her writings is that they reflect in such a personal way the richness of her own interior life. 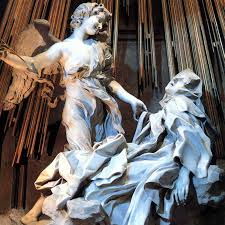 Holy Teresa of Avila in Ecstasy by Bernini in St. Peter’s, Rome

So strong and persuasive is this influence even today that it is difficult at times to realise that she wrote four hundred years ago. Even a casual reader is impressed by the freshness and relevancy of so much of what she wrote. And the more we read the more we realise just how sensible a woman she was, able to say in plain words what others hide in clichés. Her guidance is sure, her word of counsel accurate, her laughter infectious. With her own love and generosity she inspires, while her common sense and good practical judgement support and sustain us; and in the rich contrast of her great spiritual depth we find re-assurance in our own searching and questioning. The Martha- and Mary-like duality that could blend the highest contemplation with the most practical common sense, hold an easy balance between a rugged asceticism and a gentle compassion for the frailty of human nature. At one and the same time she was a woman of solitude, yet one who needed and loved companionship and friendship. 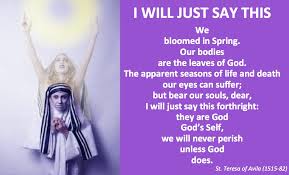 Homely, vivid and humorous writing
All Teresa’s writings teem with homely comparisons and vivid, graphic metaphors. They add colour and, so often, a touch of humour to many of her ideas. Some, like the great allegories of the way, the castle or the garden, provide the basic structure for her more important books. Others, more casual and throw-away, are scattered across almost every page, adding wit and sparkle to many of her comments and observations: images of chess and bullfights, of caterpillars and butterflies, of diamonds and precious jewels, of plants, flowers and herbs.

Of all her writings, perhaps the most famous is her Life, written when she was forty-seven years old, as a spiritual testimony for her confessors. A book she herself referred to as ‘my very soul,’ it is generally accepted as one of the great spiritual classics. It is a candid and brilliant portrait of the journey of one human soul, struggling with her own frailty and the increasing urgency of God’s invitation to intimacy and friendship. Her second book, The Way of Perfection, was written for her own nuns in the convent of St Joseph. Essentially, it is a book about prayer and the practice of the Christian virtues. It is the most distinctly motherly and domestic of all her writings, written in easy familiar style, a mother talking to her daughters.

But perhaps, the greatest of all her works is The Interior Castle written only a few years before she died. It is a spiritual gem and a literary masterpiece. Here we see her at her best, an unrivalled guide and counsellor along the path of prayer and contemplation. In some of the most beautiful passages in all spiritual literature she describes the greatest journey of all, the journey of the human soul homewards to that deepest mansion of all, where God abides in ‘second heaven’ of the human soul. 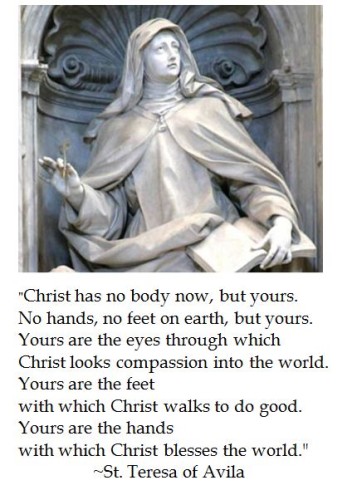 A friend of God
The real greatness of Teresa is neither in her achievements nor in her writings, but in her sanctity. Ultimately, it is the genius of her own life, a life lived totally for God, that stamps all her achievements and transforms every page of her writing. Undoubtedly Teresa would have made her mark as a woman and as a writer in whatever walk of life she chose, but that life would not have been transfused by the brilliance of her sanctity and the radiance of her intimate relationship with God.

Teresa’s greatness does not consist in what she tells us about herself but in what she tells us about God and his dealings with us. She was privileged as few have been to live and move in the presence of the living God revealed in the depths of her soul, to speak with him there and share the intimate communion of his divine life. But not only did she experience, she also recorded. She was able to enter, so to speak, pen in hand, into the divine presence and record for others what she had seen and heard. And this we call her witness, her witness to the reality of God and of the spiritual world. So powerful is her communication of this reality, so authentic her words and so genuine are its fruits in her life, that like the Jewish philosopher and convert, Edith Stein, we cannot but help reply in our own heart: ‘this is the truth.’

It is often said that Teresa’s writings are chiefly about prayer, yet this is so only in the sense that they are first and foremost about God and his dealings with us; and prayer is, for her, the atmosphere, the milieu in which this relationship with God grows and develops. The essential witness of Teresa is to the reality of the spiritual world in which God is encountered as a living God, a God who is personal, close and loving and who is intimately involved in this world of ours.

Nothing more real than God
God and the love of God alone give meaning to everything Teresa wrote and did. She sought and found the deepest friendship possible with God and everything about her reflects that discovery. For her nothing was more real than God, his love, his providential care and concern. God was her axiom; she not only lived for him, she lived in him and with him. The reality of God became the reality of her life: the truth about God, the truth about herself.

For St Teresa, God and things of God are central and this is the fundamental witness expressed in her achievements and in her writings. She was a friend of God, a daughter of the Church and a ‘service of love.’

This article first appeared in Spirituality (Sept-Oct 2000), a publication of the Irish Dominicans.