Summary of St Sylvester I, Pope. Elected bishop of Rome in 314 and died there on this day in 335. Honoured as the bishop of Rome in the important years when the Christian Church was first tolerated and then legally recognised in the Roman empire. It was during this time that the emperor Constantine called councils at Arles and Nicaea to combat heresy and that ecclesiastical basilicas were built in Rome and throughout the empire. 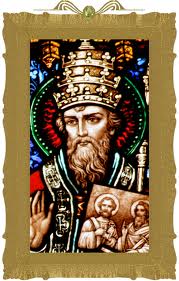 Although the pontificate of Pope Saint Sylvester I was the tenth longest in history (twenty-one years), he himself does not appear to have a very clear profile. The first Christian emperor Constantine used him and the Christian religion to bring unity to the Roman empire at that point in history. But, like most of the early popes, Sylvester is venerated as a saint. Patrick Duffy writes his story.

A figurehead during the reign of Constantine I
Sylvester was chosen pope in succession to Pope Miltiades (311-314). His pontificate coincided with the reign of the first Christian emperor, Constantine. But he himself does not appear to have been outstanding in any way. Indeed he seems more a figurehead whom Constantine used to achieve his own purpose of bringing unity to his empire.  Constantine saw Christianity, which even during the persecutions had become a prestige religion, as a means to achieve this. 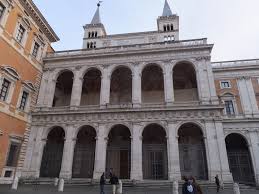 Council of Nicea (325)
Although the First Council of Nicaea defining the divinity of Jesus in 325 took place during Sylvester’s reign, he himself played no part in its proceedings. It was the emperor Constantine who convened and presided over it. The main Church people involved were Osius of Cordoba, Athanasius of Alexandria, Eustathius of Antioch and Macarius of Jerusalem against the priest Arius, whom the council condemned.

The so-called Donation of Constantine 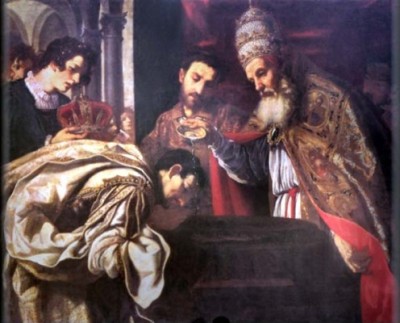 Theso-called Donation of Constantine is a document which purports to be from this time in the fourth century. According to its contents Constantine granted to Pope Sylvester I and his successors, as inheritors of St. Peter, dominion over lands in Judea, Greece, Asia, Thrace, Africa, as well as the city of Rome, with Italy and the entire Western Roman Empire, while Constantine retains imperial authority in the Eastern Roman Empire from his new imperial capital of Constantinople. The text claims this was Constantine’s gift to Sylvester for instructing him in the Christian faith, baptizing him and miraculously curing him of leprosy. The poet Dante Alighieri in his Divine Comedy lamented it as the root of papal worldliness. In fact, according to the contemporary account of the historian Eusebius of Caesarea, Constantine was only baptised on his deathbed by the bishop of that city, another Eusebius.

A forgery
It was not until the mid 15th-century, with the revival of classical scholarship and textual criticism, that the Church realised that the document could not possibly be genuine and that it was proved to have been a forgery drafted in Rome in the middle of the eighth century. It was probably because of The Donation of Constantine that Sylvester in the Middle Ages had taken on the appearance of a great pope.

Constantine’s interference in Church affairs
In a ceremony on 11th May 330 Constantine set up Constantinople at the ancient port of Byzantium and gave up his interest in the other part of the empire and in this way seemed to have confirmed the medieval myth of his “donation” of the West to the bishop of Rome. He had Arius taken back into the church and when Athanasius objected, Constantine convened a council composed only of Arian bishops at Tyre in 335, had Athanasius deposed as Patriarch of Alexandria and sent into exile.

His death and liturgical feast
Sylvester was unable to intervene and died on 31st December 335. He was buried in the Catacomb of Priscilla. This is the last day of the calendar year. In German-speaking countries and in others close to them, New Year’s Eve is known as Silvesterabend. In other countries too, the day is usually referred to as Saint Sylvester’s Day or the Feast of Saint Sylvester (in French as la Saint-Sylvestre).