Summary: Simon Stylites was an ascetic and holy man Stylos is a Greek word meaning ‘pillar’: a stylites is a person supported by or standing on a pillar. Simon (or Simeon) the Elder was the first to adopt the extraordinary penitential lifestyle of living on top of a pillar. If his motive was to find solitude, he failed; his fame spread, and more people came to see him.

Simon was born the son of a shepherd in Cilicia (southern Turkey), near modern Aleppo, Syria. As a young man, he had a dream in which he was told to dig deeper foundations to his house. He interpreted this spiritually – as meaning he should do increased penance and mortification. He joined a monastery from which he was expelled for having a twisted rope of palm leaves around him that had become embedded in his flesh.

Hermitage
Then Simon became a hermit and after spending Lent without food and water was found unconscious. He was nursed back to life with some lettuce leaves and the Eucharist. After three years he moved to a mountain top where he chained himself to a rock. The vicar of the patriarch had a blacksmith to come and cut him down. Simon was troubled that he was not left in solitude. 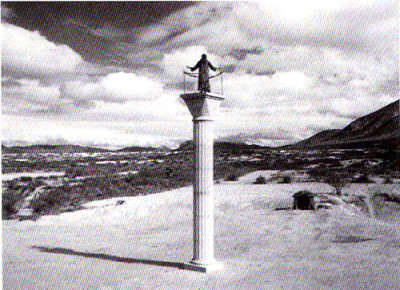 Simon then decided to spend his life on the top of pillars of increasing heights (four years at nine feet, three years at eighteen feet, ten at thirty-three feet and twenty at sixty feet) with a platform on top of the pillar about six feet across. He spent his days and nights in prayer. He bowed over 1,200 times a day. He fasted totally during Lent, spending the first two weeks standing, the second two sitting, and the last two lying down from exhaustion.

Preaching to visitors
Crowds came in increasing numbers to see this strange man. He preached to them twice a day, encouraging them in gentle charity to act sincerely and with justice, to pray, to avoid usury and swearing. Three Eastern emperors – Theodosius II, Marcion and Leo – came to see and hear him. Although some Egyptian monks tried to excommunicate him, they were told of his good sense and his charity and withdrew their excommunication. 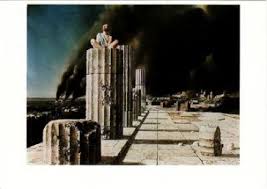 Death and influence
Simon died on the top of his pillar. The bishop of nearby Antioch had his body brought down for burial. Some disciples copied Simon’s eccentric way of life. The remains of a church and monastery built near his pillar is still visited by pilgrims and tourists today. Pilgrims can see for themselves the stone pillars with platforms on top of which Simon is believed to have lived his many years of prayer and asceticism.