Summary: Once a spiritual director at the English College, Rome, St Robert Bellarmine encouraged the student priests there who were later to become martyrs. He was a Jesuit theologian and then a bishop who was almost elected pope. He also concurred in the condemnation of Galileo. 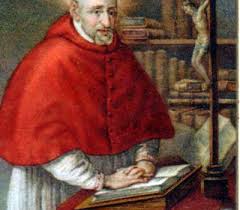 life
Born in Montepulciano in Tuscany, Robert’s father was a chief magistrate and his mother the sister of Pope Marcellus II (Marcello Cervini – 1555). After a broad education, he entered the Jesuits at 18. He taught classics and studied theology at Padua and Louvain, where he was ordained.

Theologian to Pope Clement VIII
Robert taught controversial theology – it was the Reformation time – and was recalled to teach at the Gregorian University. He was also spiritual director to the English College when many of the students would have to face martyrdom when they went back to their home country. Then after three years as Jesuit provincial in Naples, Pope Clement VIII (Ippolito Aldobrandini, pope 1592-1650) called him to be his personal theologian. Subsequently he became a cardinal and archbishop of Capua. Almost elected pope in 1605, the new pope, Paul V (Camillo Borghese), appointed him prefect of the Vatican Library.

Later life
Towards the end of his life he retired to the Jesuit novitiate in Rome and wrote a devotional work on The Art of Dying Well. He died on 17th September 1621 and is buried in the Lady Chapel of the Gesù, the main Jesuit church in Rome. He was canonised in 1930 and declared a doctor of the Church the following year. 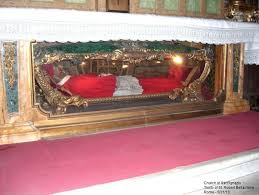