Summary: St Peter Julian Eymard, Priest, Religious, Born in La Mure d’ Isère (France) in 1811; founder of the Bl Sacrament Fathers.  Noted for his lifelong devotion to Christ’s eucharistic presence and for promoting eucharistic adoration among the people. Today the Blessed Sacrament Fathers have a highly dynamic apostolate in all six continents of the globe.

Ordained a priest of Grenoble diocese
Peter Julian Eymard was born in 1811 at La Mure, Isère, Grenoble, France. He worked at his father’s job as a cutler (making cutlery) before joining a seminary. He had to leave the seminary because of poor health, but he was ordained for the diocese of Grenoble in 1834.

Joined the Marist Fathers
In 1839, he joined the Marist Fathers, where he worked first as spiritual director with seminarians and with lay organizations promoting devotion to the Blessed Virgin Mary and to the Eucharist, particularly in the Forty Hours. The Jansenism of his time with its stress on the gravity of human sinfulness brought out in Peter Julian a reparation spirituality and he struggled for that perfection that would enable him to offer his whole self to God. 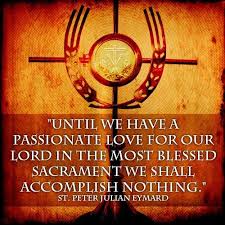 Experience of 1845
He had an intense devotion to the real presence of Jesus in the Blessed Sacrament  While carrying the Blessed Sacrament on the feast of Corpus Christi in Lyon in 1845 he experienced the Eucharist as a passionate outpouring of God for the people of the world. He was elected provincial of the Marists at Lyon in that same year. 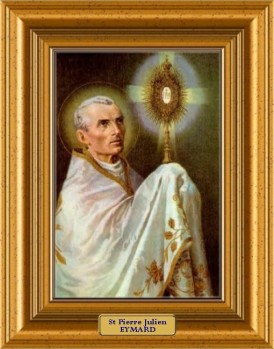 Instruction and apostolate of frequent communion
The Congregation of the Blessed Sacrament worked with children in Paris to prepare them to receive their First Communion. It invited non-practising Catholics to begin receiving Communion again and gave instruction to help them do so. Eymard supported frequent Holy Communion, which was given more authoritative backing by Pope Pius X in 1905.

Friend of other saints
Eymard overcame several difficulties – poverty, his father’s opposition, Jansenism and opposition from his Marist superiors – to achieve his goals. He was a contemporary and a friend of other saints, including St John Vianney, and fellow Marists, St Peter Chanel and St Marcellin Champagnat.

Friendship with sculptor August Rodin
The French sculptor Auguste Rodin became a friend of Eymard when Rodin, after the death of his sister, became a lay brother in the Congregation in 1862. Eymard recognised Rodin’s talent and advised him to return to his vocation as a sculptor. Rodin later produced a bust of Eymard.

Death and influence
Eymard died in 1868 and was canonised by Blessed Pope John XXIII at the end of the first session of Vatican II on 9 December 1962.  He was named Apostle of the Eucharist.