Summary: St Peter Chanel ,the first Marist missionary priest and martyr in Oceania. He spent four years working on the Island of Futuna near Tonga. Chanel College, a second level college in Coolock village, Co Dublin, is called after him. 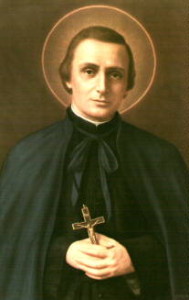 Pierre Louis Marie Chanel was born on July 12, 1803 in the area of Belley in the Rhône-Alpes region of France. After training at minor and major seminaries he was ordained in 1827 and spent a brief time as an assistant priest at Ambérieu, where he met Claude Bret who was to become his friend and also one of the first Marist Missionaries.

Early ministry
From an early age he had been thinking about going on the foreign missions and his intention was strengthened by letters that arrived at Ambérieu from a former curate, then a missionary in India. Pierre applied to the bishop of Belley to go to the missions, but was appointed instead for the next three years as parish priest of Crozet, where his zeal and care for ths sick won the hearts of the locals. During this time he heard of a group of diocesan priests who were hopeful of starting a religious order to be dedicated to Mary, the mother of Jesus.

Marist
In 1831, Pierre joined the forming Society of Mary (Marists), who worked both on local and foreign missions. He was appointed first as spiritual director at the Seminary of Belley, where he stayed for five years. In 1833 he accompanied Fr Jean-Claude Colin to Rome to seek papal approval of the growing Society.

Missionary to Oceania
In 1836 the Marists were formally approved by Pope Gregory XVI and were asked to send missionaries to the territory of the South West Pacific. Chanel, professed a Marist on 24th September 1836, was made the superior of a band of Marist missionaries that set out on 24th December from Le Havre. They were accompanied by Bishop Jean Baptiste Pompallier who was to become the first Bishop of New Zealand. Pompallier had been appointed by Gregory XVI to care for the Vicariate Apostolic of Western Oceania. Pompallier based himself in New Zealand from 1838 and became the first Bishop of Auckland, New Zealand in 1848.

Journey
Their first port of call was the Canary Islands. Crossing over to South America, his friend Fr Claude Bret died at sea from a flu virus. By June they reached Valparaiso (where the French Picpus Fathers who had care of the Vicariate of Eastern Oceania had their base). By September they had reached Gambier, then Tahiti, where the group transferred to another ship and set sail for Tonga before first dropping two missionaries at Uvea (also named Wallis), the mainseat of the mission. Pierre Chanel went to neighbouring Futuna Island, accompanied by a French laybrother Marie-Nizier Delorme. They arrived on 8 November 1837 with an English Protestant layman named Thomas Boag who had been resident on the island and had joined them at Tonga seeking passage to Futuna. 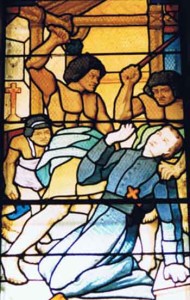 Martyrdom
The group was initially well received by the island’s king, Niuliki. Once the missionaries learned the local language and began preaching directly to the people, the king grew uneasy, suspecting that Christianity would take away his prerogatives as high priest and king. When his own son, Meitala, sought to be baptized, the king sent a favoured warrior, his son-in-law, Musumusu, to “do whatever was necessary” to resolve the problem. Musumusu initially went to Meitala and the two fought. Musumusu, injured in the fracas, went to Chanel feigning need of medical attention. While Chanel tended him, a group of others ransacked his house. Musumusu took an axe and clubbed Chanel on the head. Peter Chanel died that day, April 28, 1841.

Remains returned to New Zealand and France
News of his death took months to reach the outside world and almost a year before Marists in France learned of it. Bishop Pompallier, upon hearing of the death about six months later, arranged for a French naval corvette L’Allier, commanded by the Comte du Bouzet, to accompany the Mission schooner Sancta Maria and sail on 19 November for Wallis and Futuna Islands, taking with him Fr. Philippe Viard. The two vessels arrived at Uvea (Wallis) on 30 December 1841. They were able to locate and identify his remains, which were brought first to New Zealand in 1842  and eventually in 1850 to the Mother House of the Society of Mary in Lyon.

Eventually most on the island, including the chief Musumusu converted to Catholicism. Chanel was declared a martyr and beatified in 1889. He was canonised in 1954 by Pope Pius XII. His feast day in the Catholic Church is 28th April. The relics were returned to Futuna in 1977.