Summary: The story about the penitent Pelagia and Bishop Nonnus is told by Deacon James of Edessa. Through his eyes the reader is drawn into the mystery of forgiveness and repentance. Many monasteries and churches are named after this saint in Greece and Cyprus.

(The images right>>shows a 6th century mosaic of Saints Pelagia (left) and Eufemia in the Basilica of Sant’Apollinare Nuovo. Ravenna, Italy)

Pelagia was a well-known actress of Antioch. One day, with a throng of boys and girls dressed in gold she passed, sitting on a donkey and beautifully attired in gold, pearls and precious stones, close to where a group of bishops were in open-air conference. All the bishops hid their faces at the sight, except one, Bishop Nonnus, who gazed after her intently for a long time. 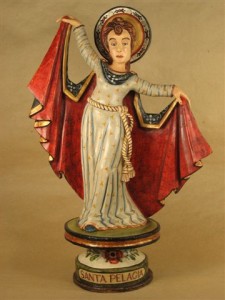 “Were you not delighted by her beauty?” he exclaimed to his colleagues almost in tears. “This lady spends more time and care in adorning herself for those she will meet than we do in preparing our souls to meet our God.”

The bishop’s dream
That night, Bishop Nonnus had a dream. A smelly black dove covered in soot stood near him. He plunged it into the baptismal font: washed clean and white as snow, it flew away.

Preaching and repentance
Next day Sunday, Pelagia came into the church where Bishop Nonnus was preaching and hearing what he said, wept tears of repentance. She sent a message saying she wished to see him. He replied she should meet him where he was in the company of the other bishops. She came in to where they were, threw herself at his feet, confessed her sins and asked for baptism. 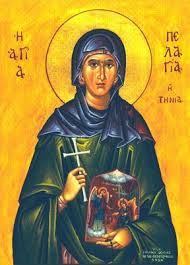 Nonnus was the one who exorcised her, then baptised her with the name Pelagia and gave her the Body of Christ. When she went back to her sponsor Romana and the other women, the devil was heard to curse Nonnus for depriving him of such a prize. Pelagia subsequently gave over all her wealth to Bishop Nonnus, who passed it on to the poor, the widows, and orphans.

The following Sunday, when she laid aside her baptismal white robes, it seems Bishop Nonnus gave her his tunic and cloak and she disappeared.

In Jerusalem
Three or four years later, an associate of Bishop Nonnus, Deacon James, was going to Jerusalem on pilgrimage. Bishop Nonnus told him to ask of the whereabouts of the monk Pelagius, who had lived as a hermit there for some years. Finding the cell on the Mount of Olives, closed in except for a small window, the wizened face that looked out at him seemed to recognise him.

“I have come from Bishop Nonnus,” he said. “Tell him to pray for me, for he is a saint of God,” was the reply. And he set about reciting the psalms of the third hour. 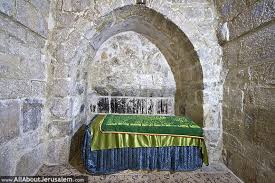 Revelation
On going back to Jerusalem, Deacon James found out that Pelagius’s fame as a holy ascetic was widespread throughout the monasteries there. Going back to the cell another day some time later, he got no reply when he knocked. So he broke open the little window and saw that the holy man was dead. So sealing up the opening, he went off to inform the monks in Jerusalem. When they came to wash and anoint the body for burial, to their surprise they discovered she was a woman. This story spread widely among all the people. Monks and nuns came from Jericho and Jordan with candles and lamps and hymns and with great joy they brought her to her burial.

A literary genre
Stories like this became a literary genre for the Desert Fathers. In them we see the truth about repentance better than in theory or analysis. The love of the two central characters tells us much about the relationship between God and the true penitent, Jesus and sinners, And the narrator, Deacon James of Edessa, like the reader, is left in god’s puzzled wonderment at its strange beauty. We need to remain open to  God’s gift of forgiveness however it comes.