Summary of  St Oswald, king and martyr. There are two St Oswalds in England: one lived in the 7th century; he was the King of Northumbria who brought St Aidan to Lindisfarne; his feast is on 5th August. The other was a 10th century monk and [...]

Summary of  St Oswald, king and martyr. There are two St Oswalds in England: one lived in the 7th century; he was the King of Northumbria who brought St Aidan to Lindisfarne; his feast is on 5th August. The other was a 10th century monk and bishop of Worcester who also became archbishop of York; his feast is on 28th February.

Oswald was the son of Ethilfrith, king of Berenicia (north of River Tees to Firth of Forth, who united Deira (Yorkshire) with it to form the kingdom of Northumbria in the late 6th century. But when Edwin seized that kingdom in 616, Oswald and his brothers fled to Scotland. They found refuge in Iona where Oswald became a Christian. On Edwin’s death in 633, Oswald returned to Northumbria and whereas his two brothers were killed by the British king, Cadwalla, Oswald now defeated him a year later at Heavenfield near Hexham.

Brings Aidan to Lindisfarne
Oswald attributed his victory in this battle to the fact that before the battle he had set up a cross and prayed to Jesus. So now that he was victorious, he sent to Iona for monks to come and preach Christianity in Northumbria. The first monk to come was Colmán. but he was quite severe and thought all Northumbrians were barbarous and only antagonised his listeners. He returned to Iona and was replaced by Aidan, whose more gentle preaching Oswald translated for the Northumbrians. Oswald gave Aidan the island of Lindisfarne, near his palace at Bamburgh, as his monastery and episcopal see.

Expansion and death
Oswald united Bernicia and Deira into his one kingdom of Northumbria. He married Cyneburga, daughter of Cynegils, king of Wessex, whose baptism Oswald sponsored. Perhaps because his expansionist policies, Oswald ran into opposition and after only eight years at the age of 38 he was killed by Penda, king of Mercia, at the battle of Maserfield (identified as Oswestry 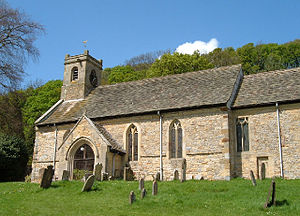 in Shropshire). Bede says that as he fell, he was heard to pray for the souls of those who died with him. Oswald’s body was mutilated in sacrifice to Woden, but his members were recovered. It was said his head was brought to and rests in Durham Cathedral, but there are claims that there are four heads of St Oswald on continental Europe!

Memorial church at Heavenfield
A Church of Saint Oswald (c/f Image above) stands on the location of the wooden cross left by Oswald at Heavenfield, the night before the battle. It is visible from the B6318 Military Road that runs alongside the Roman Wall.