Summary of St Otteran, monk, a descendant of Conall Gulban, is usually identified with Odhran who preceded Colum Cille in Iona. His death is recorded in 548 and his grave was greatly revered in Iona. He was chosen by the Vikings as patron of the city of Waterford in 1096 and later patron of the diocese

St Otteran is variously described as a son or a companion or a predecessor of St Columba on the island of Iona, where there is a graveyard in his honour, the “Reilg Odhráin”. He is also the principal patron of the diocese of Waterford, having been chosen for that honour by the Vikings. They had buried some of their dead on Iona and were the first occupiers of Waterford city.

Patrick Duffy looks at his story.

The tradition is that, when this chapel was being erected, no matter what the workers did or how well they worked, every morning all that had been built the previous day was thrown down. At last a voice came to Colmcille telling him that the only way to get the chapel completed was to bury a living man under its foundation; otherwise it would never be finished. Colmcille decided that no one could be better to put under the foundation than his own son and proceeded to build on top of it.

One day, however, Odhran raised his head, and pushing it through the wall, said: “There is no hell as you suppose, nor heaven that people talk about.” This alarmed Colmcille, in case Odhran should communicate more of the secrets of the otherworld. He had the body removed at once and buried in consecrated ground and St Odhran never again troubled anyone.

A descendant of Conall Gulban, the Irish king, son of Niall Naoi nGiallach, who founded the kingdom of Tír Conaill in the 5th century, Odhran is said to have been an abbot in Meath and to have preceded or accompanied Colmcille to Iona. The Irish Martyrologies tell us plainly enough that the saint of that name honoured on October 27th was a monk of Hy, a kinsman of St. Columba, and that he worked in Iona evangelising the people of Scotland. 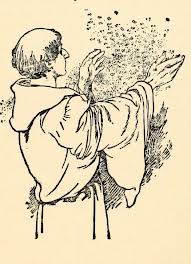 Titular guardian of Viking ancestors’ ashes
Otteran’s death is recorded as being in 548 AD and his grave was greatly revered in Iona. He was the first person to be buried in the monastic cemetery to which the Vikings carried their dead chieftains and great men for burial from all parts of Europe. The Vikings chose Odhran, the titular guardian of their ancestors’ ashes, (Otteran is its more commonly anglicised form) as patron of Waterford city in 1096. Later he was chosen as patron of the diocese.

Killotteran
Killotteran is the name of a civil parish two miles west of Waterford City and derives its name from the townland on which stood an ancient church, the church of Odran.