Summary: St Monica, Widow, probably born at Tagaste (Algeria) about 331; died at Ostia (Italy) in 387. She undertook many years of penance and prayer for her brilliant but wayward son, Augustine (Feast tomorrow). Following his conversion and baptism in Milan, she died at the beginning of her journey home to Africa. She was well noted for her parental devotion, patience, and persistence in prayer. 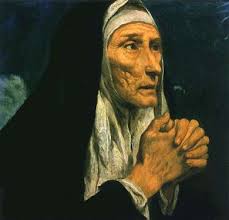 Monica was a  caring mother whose constant love for her wayward son, Augustine, brought him to conversion after seventeen years.

One of my favourite saints and, indeed, one whom I most often mention these days is Monica. Her feast day is on 27 August, and it precedes the feast day of her son, the great St. Augustine. I mention her often in sermons these days, especially at funerals, and also when talking to parents whose sons or daughters no longer walk with Christ, or at least with the Church, in the faith that their parents followed.

Unhappy Marriage
First, let us look at who this extraordinary woman was before we try to glean some lessons from her life. We know little of her childhood, except that she was born in North Africa in the year 333. She was married early in life to a man named Patritius, who held an official position in Tagaste. He was not a Christian, and his practice of his pagan religion was only in name. 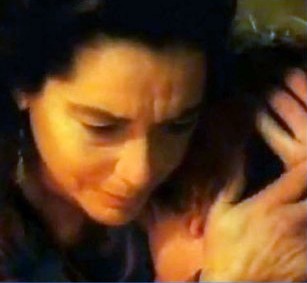 A prayer to St. Monica. ‘The Sacred Heart of Jesus, comforter of the sorrowful and salvation of the afflicted, help me today.’

His temper was violent, and he appears to have had some wayward habits. It is even said that he beat his wife. Consequently, Monica’s married life was far from being a happy one, more especially as Patritius’s mother seems to have been very similar in temperament. There was, of course, a gulf between husband and wife: her alms deeds and her habits of prayer annoyed him, but somehow he always held her in a sort of reverence.

Monica was not the only matron of Tagaste whose married life was unhappy but, by her sweetness and patience, she was able to exercise a real apostolate amongst the wives and mothers of her native town. They knew that she suffered as they did, and her words and example had a positive effect. In due time she won the favour of her mother-in-law by the mildness of her manner and by her patience in the midst of her difficult marriage.

Family Fortunes
Three children were born of this marriage: Augustine the eldest, Navigius the second, and a daughter, Perpetua. Monica had been unable to secure baptism for her children, and her grief was great when Augustine fell ill. In her distress, she begged Patritius to allow him to be baptized; he agreed but, on the boy’s recovery, withdrew his consent. 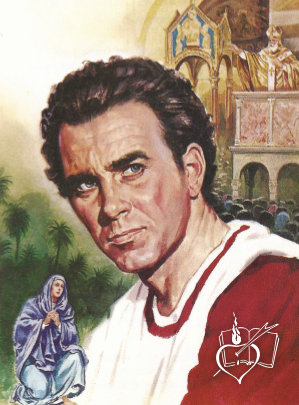 All Monica’s anxiety now centred on Augustine. Like his father before him he, too, was wayward and lazy. He was sent to Madaura to school, and Monica seems to have literally wrestled with God for the soul of her son. A great consolation was given her, however, in compensation, perhaps, for all that she was to experience through Augustine: Patritius became a Christian.

Meanwhile, Augustine had been sent to Carthage to pursue his studies, and there he fell into serious sin. Patritius died very shortly after his reception into the Church, and Monica resolved not to marry again. At Carthage, Augustine had become a follower of the Manichean sect, and when, on his return home, he aired certain heretical propositions, Monica drove him away from her table. Later, a strange vision which she had urged her to take him back.

It was at this time that she went to see a certain holy bishop, whose name is unknown, but who consoled her with the now famous words: ‘The child of those tears shall never perish’. There is no more pathetic story in the annals of the saints than that of Monica pursuing her wayward son to Rome.

Saint Ambrose
Augustine, perhaps frustrated by the presence of his ‘nagging’ mother, went off secretly to Milan. She followed him there, however. In Milan, she found the bishop of that city, St. Ambrose, and through him she ultimately had the joy of seeing Augustine yield, after seventeen years of resistance. The story of his conversion is a beautiful page in the annals of the saints, and worthy of recounting in its own right. Mother and son spent six months of true peace at Cassiacum, after which time Augustine was baptized in the church of St. John the Baptist, in Milan. Africa called them, however, and they set out on their journey, stopping at Civitavecchia and at Ostia.

Remember Me at the Altar 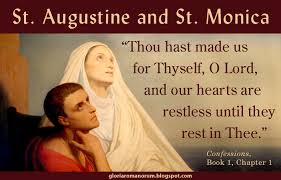 Here death overtook Monica in 387, and the finest pages of his Confessions were penned as the result of the emotion Augustine then experienced. In these pages, Augustine recounts how he and his brother were discussing where they might bury Monica when she died. She overheard their whispers, and chided them somewhat for their concerns, with words which have come down to us through the centuries and which have appeared on millions of memorial cards: ‘All I ask is that you remember me at the altar of God’.

These are words I often quote in funeral sermons, knowing that the saintly parishioners I bury would also want their children and grandchildren to remember them in this way above all else.  Monica was buried at Ostia, and at first she seems to have been almost forgotten, though her body was removed during the sixth century to a hidden crypt in the church of St. Aureus. About the thirteenth century, however, the cult of St. Monica began to spread, and a feast in her honour was kept on 4 May.

In 1430, Pope Martin V ordered the relics to be brought to Rome. Many miracles occurred on the way, and devotion to St. Monica was definitely established. Later, the Archbishop of Rouen, Cardinal d’Estouteville, built a church in Rome in honour of St. Augustine, and deposited the relics of St. Monica in a chapel to the left of the high altar.

Prayer of St. Monica
Some years ago, I came across a prayer invoking the intercession of Monica for those who may have strayed from their childhood faith. I offer it to you now.

Eternal and merciful Father, I give you thanks for the gift of your divine Son, who suffered, died and rose for all people. I thank you also for my Catholic faith, and ask your help that I may grow in fidelity by prayer, by works of charity and penance, by reflecting on your word, and by regular participation in the sacraments of Penance and the Holy Eucharist. You gave St. Monica a spirit of selfless love, manifest in her constant prayer for the conversion of her son, Augustine.

Inspired by boundless confidence in your power to move hearts, and by the success of her prayer, I ask the grace to imitate her constancy in prayer for (name a person here) who no longer shares in the intimate life of the Catholic family. Grant through my prayer and witness, that he/she may be open to the promptings of your Holy Spirit to return to loving union with your people. Grant also that my prayer be ever hopeful and that I may never judge another, for you alone can read hearts. I ask this through Christ our Lord, Amen.

This article first appeared in The Messenger.