Summary: St Miguel Febres Cordero : a precocious child from the Andes of Ecuador, who became a De La Salle brother. After some years working in Europe, he died in Barcelona, Spain in 1910. 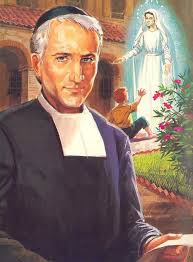 Miguel was a precocious child from the Andes of Ecuador, who became a De La Salle brother. He trained himself to be both an accomplished educator and a holy man. After some years in Europe, he died in Barcelona, Spain in 1910. In 1937 his body was returned to Ecuador. Pope John Paul II canonised him in the year 1984.

A crippled but precocious child educated at home
Francisco Febres Cordero Muòoz was born in the city of Cuenca, 7,000 ft high in the Andes, in Ecuador. His grandfather had been active in Ecuador’s struggle for independence in 1822. His father taught English and French in the seminary in Cuenca. His mother was a devout woman who was active in works of charity.

Francisco was crippled in both legs from birth. His mother took great care of him and educated him at home until he was nine. He then attended the De La Salle Brothers school in Cuenca where he was quite a precocious student. He was chosen to give the address of welcome to President Garcia Moreno when he came to visit the school. 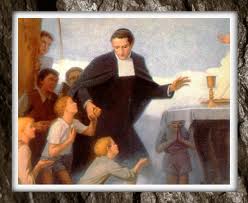 t fourteen Francisco decided to join the De la Salle Brothers and though his father at first made strong objections, he finally consented. Miguel, as he was now called, began teaching in Quito at fifteen and distinguished himself as a teacher of religion and Spanish. At twenty, he was producing textbooks that were used countrywide.

Miguel was chosen by the Brothers to attend the beatification of John-Baptist de la Salle in Rome in 1887. On his return he continued his work as a teacher of Spanish language and literature. He became the director of novices from 1896 to 1905 and was then appointed principal of Sagrada Fimilia school, but was soon relieved of the post as he wasn’t a great administrator.

Working in Belgium and Spain
On request from the order’s headquarters at Lembecq-lez-Hal in Belgium, Miguel was seconded there to translate French books into Spanish. He was homesick and the climate did not suit him. He transferred to Barcelona, but here a general strike broke out and churches were being burned. The Brothers were evacuated and Miguel managed to make a pilgrimage to the shrine of Our Lady of the Pillar at Zaragoza.

Death and influence
The experience at Barcelona took its toll on his health; he caught pneumonia and died on 7 February 1910. When news of his death reached Ecuador, the country felt a great sense of loss and the conviction grew that he should he should be recognised as the country’s first saint. In 1937, partly due to the desecrations that were taking place in the Spanish Civil War, his remains were returned from Spain to Quito in Ecuador.

In 1977 Pope Paul VI beatified Miguel and in 1984 Pope John Paul II canonised him. He is a saint, not because of his precocity or his intellectual ability, but because the warmth of his prayer life overflowed in generosity and service to others.