Summary: St Mark as well a being the author of the second gospel,  is famous for having founded the Church in Alexandria, from where his relics were brought to Venice in the ninth century. Among the evangelists, the lion is his symbol (Rev 4:7-8).

Patrick Duffy reviews what is known about him. 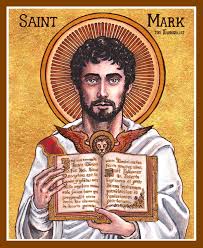 Traditionally, Mark is identified with the young man described in Mk 14:51 who followed Jesus when he was arrested: “He had nothing on but a linen cloth; they caught hold of him, but he left the cloth in their hands and ran away naked”. He is also mentioned in Acts 12:12 when Peter escaped from prison: “He went straight to the house of Mary the mother of John Mark in Jerusalem, where a number of people had assembled and were praying”. In Acts 12:25 John Mark accompanies Paul and Barnabas from Jerusalem to Antioch and goes on with them to Cyprus (13:5), but for some reason he went back from there to Jerusalem (13:13).

Violent quarrel with Paul
Paul did not appreciate this and refused to take John Mark with him on his second missionary journey (Acts 15:38). After a violent quarrel Barnabas went with John Mark to Cyprus (Acts 15:39) while Paul took Silas as his companion to Asia Minor (Acts 15:40). Later Paul and John Mark were reconciled (Col 4:10 and 1 Tim 4:11).

Disciple of Peter
However, another tradition coming from a fragment of Papias of Hierapolis (2nd century AD) and quoted by the historian Eusebius (263–339) in his Church History III.39 sees Mark as a disciple of Peter who based his gospel – or at least the first draft of it – on what he learned from Peter:

“Mark having become the interpreter of Peter, wrote down accurately whatever he remembered. It was not, however, in exact order that he related the sayings or deeds of Christ. For he neither heard the Lord nor accompanied Him. But afterwards, as I said, he accompanied Peter, who accommodated his instructions to the necessities [of his hearers], but with no intention of giving a regular narrative of the Lord’s sayings. So Mark made no mistake in writing some things in this way as he remembered them. For of one thing he took especial care, not to omit anything he had heard, and not to put anything fictitious into the statements. Matthew put together the oracles [of the Lord] in the Hebrew language, and each one interpreted them as best he could.” 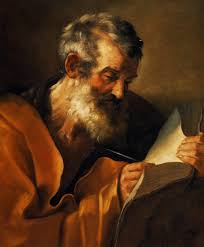 Peter refers to Mark affectionally as his “son” (1 Pet 5:13). Both Saints Irenaeus and Clement of Alexandria mention that association.

Patron of Venice
Early in the 9th century Mark’s body was brought to Venice, where he is patron saint of the city and cathedral even to this day. The basilica there contains his relics and a series of mosaics on Mark’s life, death and the bringing of his remains to Venice. 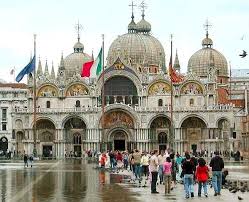