Summary: St Louis of France, Confessor. Born at Poissy (France) in 1214; died near Tunis (Tunisia) on this day in 1270. Regarded as a model Christian king at a time of high cultural achievement, but led two disastrous crusades, on the second of which he died of typhoid. He was noted for his impartial justice, for his care of the poor and the sick, and for honouring his word. 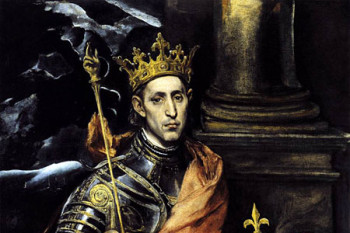 King St Louis IX of France is the only canonised king of France. He helped the Church against the Albigensian heresy and went on two Crusades. He had a reputation for personal holiness, gave patronage to the arts and was balanced in disputes with other powers.

Early life
Louis was born in 1214 at Poissy, near Paris, the son of King Louis VIII and Blanche of Castile. When he was twelve years old (1226), his father died. He was then crowned king at Reims Cathedral, while his mother ruled France as regent till he was about twenty. She remained his advisor until her death in 1252. In 1234 Louis married Margaret of Provence (1221–1295), whose sister Eleanor was the wife of Henry III of England.

Benevolent monarch
During Louis’s boyhood, there had been a crusade in the south of France against the Albigensians and toward the end Louis had some involvement. After this he worked to unify France but he showed a willingness to negotiate and yield where necessary to English and Spanish claims. Louis had a benevolent personality and his reign was regarded as a golden era when the kingdom of France was at its height in Europe, both politically and economically. With his reputation for saintliness and fairness, he was regarded as the first among the kings and rulers of Europe and often was called to mediate in their disputes.

Friend of Thomas Aquinas
Louis founded a hospital for the poor, sick, and blind, known as the Quinze-Vingts (15 x 20 – originally for 300 inmates). Robert de Sorbon, the founder of the Sorbonne (University of Paris) was his confessor and his personal friend, and Thomas Aquinas was a frequent guest at his table. Once, it is said, Thomas dropped out of the conversation, lost in thought, and then suddenly struck the table with his fist and exclaimed, “That is a decisive argument against the Manichees!” Louis at once called for writing materials, so that Thomas could record the argument before he had a chance to forget it.

Patron of the arts
Louis’s reign coincided with the great era of building of Gothic cathedrals in France. Louis’s patronage of the arts helped the development of Gothic art and architecture. He built the Sainte-Chapelle in the centre of Paris within the royal palace complex (now the Paris Hall of Justice), on the Île de la Cité. 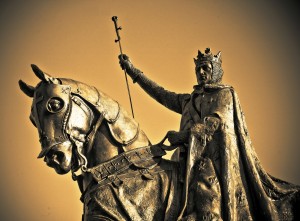 Louis fought in two Crusades, both of which were total failures. To finance the first he ordered the expulsion of all Jews engaged in usury and the confiscation of their property, for use in his crusade. He also ordered at the urging of Pope Gregory IX, the burning of many manuscripts of the Talmud and other Jewish books. In 1248 he led an army to Cyprus, where he was joined by 200 English knights. In 1249 they went on to Egypt and took the city of Damietta, but discipline broke down and Louis was unable to keep the soldiers from looting.

Little achieved
In 1250 Louis lost the Battle of Fariskur and was captured by the Egyptians. His release was eventually negotiated in return for a high ransom and the surrender of the city of Damietta. He sailed to Palestine, visited the few Holy Places that were accessible. He spent four years in the Crusader kingdoms of Acre, Caesarea, and Jaffa. He used his wealth to help the Crusaders rebuild their defences and in diplomacy with the Islamic powers of Syria and Egypt. When he left the Middle East to return to France in 1254, there was a garrison in the city of Acre for its defence against Islamic attacks.

9th Crusade (1270)
In 1270 Louis joined another crusade, which landed in Tunis, where he immediately caught typhoid fever and died on 25th August.

Rex Christianissimus (“the most Christian king”)
Louis IX is best understood if we see him as trying to fulfill the duty of France, which was seen as “the eldest daughter of the Church” (la fille aînée de l’Église), a tradition of protector of the Church going back to the Franks and Charlemagne, who had been crowned by the Pope in Rome in 800. Indeed, the Latin title of the kings of France was Rex Francorum, “king of the Franks” and Rex Christianissimus (“the most Christian king”). The relationship between France and the papacy was at its peak in the 12th and 13th centuries, and most of the crusades were actually called by the popes from French soil. Eventually, in 1309, Pope Clement V even left Rome and relocated to the French city of Avignon.