St Lawrence, Deacon, Martyr. He died at Rome on this day in 258, four days after Saint Sixtus II, with whom he was closely associated. Honoured for his almsgiving, he became, after the apostles, the most celebrated martyr of the Church of Rome. His cult spread throughout the Church from the fourth centuryans he was named in Eucharistic Prayer I (The Roman Canon), and in many ancient Roman churches dedicated to him. 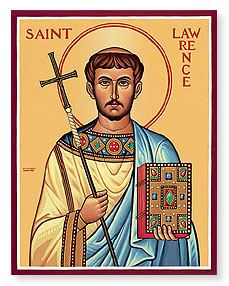 Lawrence was a deacon of the Church of Rome and  died in the persecution of Valerian four days after Pope Saint Sixtus II and his four fellow-deacons. Reputedly he was roasted on a gridiron (c/f image below). He was buried on the Via Tiburtina at the Campo Verano near to where Constantine the Great later built a basilica. He has been venerated throughout the Church from the fourth century.

A deacon in the service of Pope St Sixtus II
The tradition about Lawrence is that he was a deacon from Spain in the service of Pope Sixtus II. He was put in charge of the administration of Church goods and care for the poor. He is also regarded as one of the first archivists and treasurers of the Church. When the soldiers of the emperor Valerian arrested Pope Sixtus and his four deacons (See 7th August) while saying Mass in the cemetery of Saint Callistus, and took them off to martyrdom, Lawrence tried to hold Sixtus back, saying, “Where are you going, priest, without your deacon? Where are you going, father, without your son?” Sixtus promised Lawrence they would be reunited within three days.

Roasted on a gridiron; patron of chefs 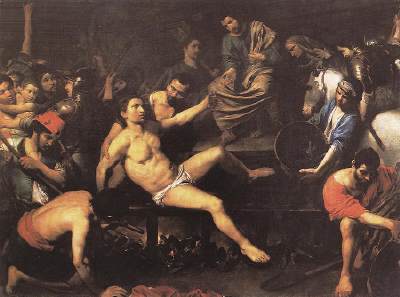 The official ordered his soldiers to strip Lawrence, tie him to a gridiron, build a slow fire under it to roast him. But instead of being in agony, Lawrence called out jokingly to his executioners, “Turn me over. I’m already roasted on this side.” In a short time he was dead. This story comes to us from St Ambrose of Milan (340-397). Because of this he is regarded as the patron saint of chefs!

Papal Basilica of San Lorenzo fuori le Mura
His fellow Christians buried Lawrence on the Via Tiburtina outside the city walls. About fifty years later in recognition of the reverence in which he was held by the Christians of Rome, the emperor Constantine had a basilica constructed over his tomb. With various modifications made over the centuries, it remains today as the Basilica of San Lorenzo fuori le Mura (St Lawrence outside-the-Walls) and is just one of seven major churches in his honour in the city.

Named in the Roman Canon of the Mass
The fact that the name of Lawrence name is included among those commemorated in the Roman Canon (First Eucharistic Prayer) shows the extraordinary reverence in which he was held in the fourth and fifth centuries. In the Veronese Sacramentary, which is a record of the liturgy of Rome in the sixth century, there are prayers for fourteen Masses of St Lawrence and his feast has a vigil before it and an octave following it.

Ravenna mosaics
In the mausoleum of the imperial princess Galla Placidia in Ravenna, Lawrence is depicted carrying a long cross on his shoulder and a gospel book in his hand walking towards the fire and the gridiron.

Patronage
Lawrence is regarded as the patron saint of tanners, roasters, chefs, archivists, librarians and treasurers. He is one of the most widely venerated saints in the Catholic world, giving his name even to Lund Cathedral in Sweden, the Basilica in the Escorial Palace in Spain and the St Lawrence River in Canada.