Summary: St Juliana was a spirited young woman of Florence who felt drawn to serve God in a radical way. Through her uncle she was attracted to the Servites, first as a tertiary and later became the Superior of the “Mantellate” Servite Sisters. 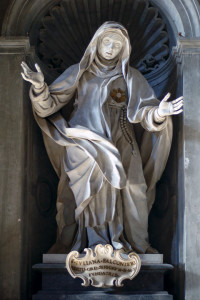 Juliana was born into the noble Florentine family of Falconieri in 1270. Her parents had paid for the construction of the Church of L’Annunziata in Florence.  Her father died when she was quite young and her uncle Alexis, who shared her upbringing with her mother, was one of the seven founders of the Servite Order, the only one of the founders who did not become a priest.

The Servites
The Servite order was begun by seven merchants, wealthy young men of Florence, who were disenchanted with the worldly life of the city. They wanted to live a more radical Christian life and at first were first known as Laudesi, “Praisers”, and later as the Servants of Mary, or Servites. See 17th February. (Feast of the Seven Founders)

Servite tertiary
At 15 Juliana refused her family’s plans for her to marry and soon after became a Servite tertiary. She continued to live with her mother and followed the rule given her by the prior general of the Servites, St. Philip Benizi, practising charity, chastity, mortification, penance, and prayer.  Her mother was so impressed with her conduct that she eventually also placed herself under her daughter’s direction and spent the last 20 years of her life living a quiet, austere life of prayer and good works. Other young women of Florence had become tertiaries and formed a community. Juliana found a place for them at the Grifoni Palace in Florence.

Mother’s death
After her mother’s death in 1305 Juliana herself asked to be admitted to the tertiaries’ community. They elected her as their superior. She continued in this position for the next thirty five years until the end of her life .

Mantellate
For their habit they adopted a black gown or cloak secured by a leather girdle with a white veil. The gown had short sleeves to facilitate work and so people called them Mantellate, because it looked like a cloak (mantello). Their main devotion was to Our Lady of Sorrows and their main activity was caring for the sick. 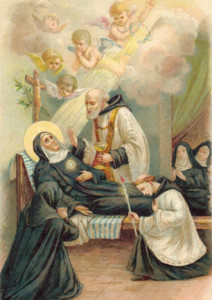 Miracle on her death-bed
As Juliana lay on her death bed she was sick much of the time and couldn’t receive Holy Communion. She asked the priest to spread a corporal upon her breast and lay the host on it. Shortly afterwards the host disappeared and Juliana died. When her community came to wash her body, they found the imprint of the cross on her heart just as it had been on the host. She is buried below the altar in L’Annunziata church in Florence.

Canonisation and influence
Immediately after her death Juliana was honoured as a saint and was canonised  in 1737. She is usually represented in the habit of her order with a host upon her breast. The order of Mantellate Sisters has houses in mainland Europe and England, the USA and Canada. The sisters are involved in education, parish ministry, hospital and prison chaplaincies, the care of cancer patients and AIDS sufferers. Her feast is usually celebrated on 19th June.