Summary:St Josaphat, Bishop, Martyr, born in Vladimir (Ukraine) in 1580, and  died at Vitebsk (Belarus) on this day in 1623. A Basilian monk who became archbishop of Polotsk, worked strenuously to uphold and spread the Union of Brest-Litovsk by which Churches of the province of Kiev, with their Byzantine liturgy and customs had entered into communion with Rome. In a complex situation of national and religious antagonism, he was killed by violent opponents. Noted for his energetic pastoral reform and courageous ecumenism.

Josaphat was the monastic name chosen by John Kunsevich, when he became a monk and dedicated his life to reforming the Byzantine-Slavonic Church in what is now Belarus and uniting them with Roman Catholicism. His ecumenical endeavour brought him into severe conflict and ended in his brutal murder.

Early life
Born in what is now Belarus, Ioann (as he was christened) worked for a trader who offered him a partnership and his daughter’s hand in marriage. But Joann was also interested in learning Church Slavonik, the liturgical language of the Eastern Church and encouraged by two Jesuits, he became a monk in the monastery of the Holy Trinity in Vilnius taking the name Josaphat. Here he met a kindred spirit, John Benjamin Rutsky, a convert from Calvinism, and both started a movement that developed into the Order of St Basil.

Union of Brest-Litovsk 1595
Shortly before this, the life of the Orthodox Church in the area known as Ruthenia (Russia, Ukraine, Belarus, part of northeastern Slovakia and a strip of eastern Poland) had fallen into considerable decay. At this time, the metropolitan of Kiev, Michael Ragoza, sought and partially achieved a reunion between Orthodoxy and Catholicism. At a synod at Brest-Litovsk in 1595, six out of eight Orthodox bishops, including the Metropolitan Ragoza, supported the union, but the remaining two bishops, together with many delegates from monasteries and parish clergy, opted to remain in the Orthodox Church. The two sides concluded by excommunicating and anathematising one another.

The Uniate Church
As a result of this synod, there came into existence what became known as the Uniate Church, that is, those celebrating the Slavonik-Byzantine liturgy in common with the Orthodox, but re-united with Rome. While some Catholics pressured these to celebrate a Latin liturgy, Rome allowed them to keep the Salvonik-Byzantine rite. However, the Orthodox resented this development and did not feel the Uniates were the proper form of Christianity for this region. 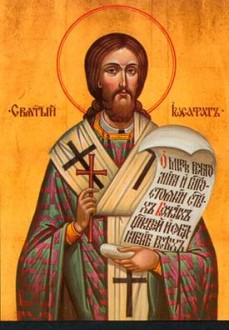 Monk and Archbishop of Polotsk
The monastery of Holy Trinity at Vilnius was part of this movement towards re-union. John Benjamin Rutsky became abbot and many more monks joined; Josaphat was sent to Poland to organise new monasteries. Rutsky was then appointed metropolitan of Kiev in succession to Ragoza. Josaphat succeeded him as abbot but soon after was appointed archbishop of Polotsk. Here he met a situation of decay along with suspicion of his desire for reunion among the more devout church members and also among Latin-rite Poles, who looked down on the Ruthenians as a rough breed. Josaphat used monks from Holy Trinity to help him in his work of reform. He held synods in the cities, introduced a catechism he wrote himself and worked hard for the reform of the clergy. An assembly elected a rival bishop Meletius Smotrystky, and although Josaphat had the support of the people of Polotsk, he still was not backed by the Polish bishops, who resented the fact that he insisted on retaining the Byzantine-Slavonik rite allowed by the Union. 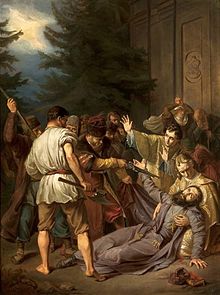 Anti-Roman sentiment was strong in the city of Vitebsk. Josaphat decided to go there in person to try to effect reconciliation. But followers of the rival archbishop assembled a hostile crowd. In the confusion a mob broke into the palace where Josaphat was staying and attacked his servants. When Josaphat tried to appeal to them, two men attacked him, one hitting him with a club the other splitting his head open with an axe. The hostile crowd seized his body and, weighting it with stones, threw it in the local River Dzvina. Four years after his death Smotrystky repented and joined in the defence of the Union.

Canonisation and influence
Josaphat was canonised by Pope Pius IX in 1867. A huge basilica modelled on St Peter’s in Rome was built in his honour in Milwaukee, Winsconsin, USA and St. Josaphat Cathedral is a Ukrainian Catholic cathedral in Edmonton, Alberta, one of the best examples of Byzantine Rite church architecture in Canada.

Iconostas in St. Josaphat Cathedral is a Ukrainian Catholic Cathedral in Edmonton, Alberta