Summary: St John Vianney, Priest, Born near Lyons (France) in 1786; died at Ars on this day in 1859. Overcame various obstacles, including little education and lack of means, to be ordained a priest. Served in a remote parish as the Curé of Ars, where his sanctity attracted thousands of visitors. Noted for his preaching and confessional counsel and is honoured as a model for parish clergy.

Fr John Murray PP tells us about this holy man.

St John Marie Vianney, the Curé of Ars, is the patron saint of 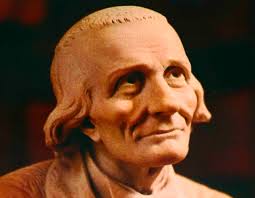 parish priests because he was such a good one himself.

‘If there were three like him on this earth, my Kingdom would be destroyed.’ The author of these words is supposed to have been Satan but as he is not likely to disclose how he could be defeated, then the story could be regarded as apocryphal.

Nevertheless there is an undoubted truth behind it. Writers on Our Lady would often say that the reason Satan hates Mary is that he cannot stand her humility. He could attack the miracle workers and the great preachers among the saints and perhaps find an Achilles heel in their pride, but the nothingness of Mary -and the saint we recall here – were a total affront to the fallen angel of light.

Birth
John Marie Vianney was born near Lyons on 8 May 1786 to Marie and Matthieu. It was just three years away from the seismic event of the French Revolution which was to change the face of Europe and the Church for decades. Indeed, his own village was initially saddled with a ‘constitutional priest’ and so his parents and others had to assist in secret any fugitive priest who might come their way.

From an early age a vocation was discerned, and when the cure at Ecully opened a school for ecclesiastical studies, John was sent. Studies and John were never great friends: his early years of education had been spent more in the fields minding sheep.

Despite this difficulty, seminary proper had still to wait, for one of Napoleon’s many wars intervened and John Marie was conscripted to fight against Spain. However, on the morning of departure, John went off to the church to pray and when he returned, found that the platoon had gone off without him. Thankfully the recuiting officer believed his story and sent him after the troops. But John never saw any action and after fourteen months, was able to resume his path to the priesthood.

John struggled with Latin and philosophy, but on 13 August 1815 he was finally ordained priest by the Bishop of Grenoble. His first curacy was as assistant to M. Ballet in Ecully who had recognized his vocation and who urged him to persevere despite the difficulties.

Within three years he was made parish priest of Ars – a village of just 230 people – and it is with that small village that he became known throughout all of France. He visited every house and made himself known to his new parishioners. He immediately tried to restore a sense of Sunday in his flock, not just in getting them to attend Mass but also to refrain from unnecessary work.

There were other battles he fought which might strike some today as outmoded or even impossible to contemplate: he waged war on blasphemy and profanity, citing from the pulpit the words and phrases which offended God. He was also set against dancing and saw it as an occasion of sin.

Modesty in clothing was another of his battles.
‘If a pastor remains silent when he sees God insulted and souls going astray, woe to him!
If he does not want to be damned, and if there is some disorder in his parish,
he must trample upon human respect and the fear of being despised or hated.’

This responsibility brought him great anguish but as a rule he preferred to show the attractive side of virtue rather than the ugliness of vice. When he spoke on the tenderness of God who had been offended, he often moved the hardest of hearts to change their ways.

People came from all about. 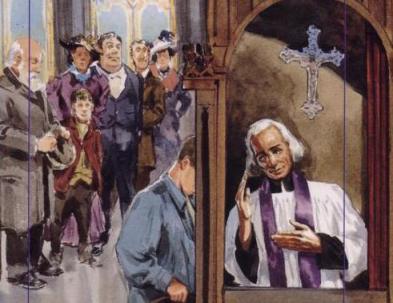 He had not long been in Ars when people began coming to him from other parishes and finally from every corner of the country. During the last ten years of his life he would spend up to eighteen hours a day in the confessional. His advice was sought by everyone, from bishops and priests to people in all sorts of difficulty. He loved especially those who were sick.

Despite the ‘success’ which John enjoyed in Ars he longed for peace and quiet. He left the village on three occasions and it needed the diplomacy of the bishop to make him return in 1843.

His instructions in the confessional were often very simple and in language that people could recognize, with images drawn from everyday life. Towards the end those who heard him preach admitted that they could hardly decipher a word, so inaudible was his speech. Yet they knew that God loved them because they saw this in his eyes. They knew too, that his own life was a constant mortification from his early youth.

He scarcely ate enough to live on. For years his practice had been to boil a pot of potatoes at the start of the week and for the rest of the week he would simply eat one or two of the cold potatoes which remained! In the years 1858-9 almost 100,000 people came to Ars but by now, the curé was an old man close to death. The strain was becoming too much and on 29 July he retired to bed for the last time. 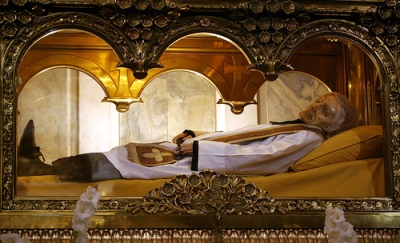 This picture of St. John Vianney’s incorrupt body, entombed at the main altar in the Basilica of in Ars, France. His body has not decayed 150 years after his death.

This article first appeared in The Messenger (August 2008), a publication of the Irish Jesuits.