John Chrysostom was a bishop and an eloquent preacher (His nickname Chrysostomos means “golden-mouthed”) . He became patriarch of Constantinople, fell foul of the empress there, Eudoxia, possibly for his denunciation of her wealth,  and she had him deposed and exiled. The Eastern Church still celebrates the form of the liturgy of the Eucharist he gave it. 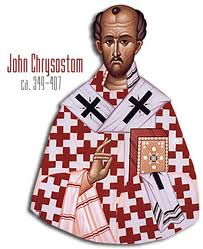 Born in Antioch in Syria, John was brought up by his Christian mother after the early death of his soldier father. He studied under the distinguished pagan rhetorician Libanius in the expectation he might be a lawyer, but he also studied theology and joined a group of hermits in the mountains, where he lived in extreme asceticism.

Ministry at Antioch
After seven years he returned to Antioch because of ill-health. He was ordained a deacon and priest and from 386 to 398 had a reputation as a great preacher at Antioch. His straightforward understanding of scripture meant his talks were practical. One series of sermons he preached here were directed against Christians who were inclined to celebrate Jewish festivals. He held Jews responsible for Jesus’ death and this has led to his being charged with anti-semitism.

But following an incident during which the citizens of Antioch disrespected the statues of the emperor and his family, he preached twenty one sermons during Lent which brought the citizens to repentance and served also to pacify the emperor. 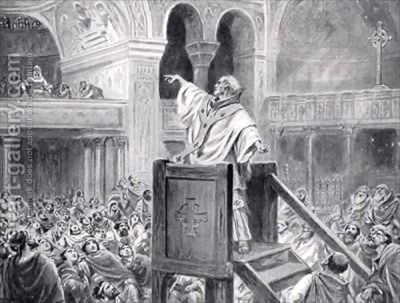 Controversy at Constantinople
Appointed archbishop of Constantinople, John spoke against the misuse of riches and against women wearing expensive garments. The empress Eudoxia took his criticisms personally and contrived with Patriarch Theophilus of the rival see of Alexandria to convene a synod to indict John on a number of charges, many of them trivial. John refused to attend, so the synod deposed him. The emperor, Arcadius, banished him to Armenia. Pope Innocent I tried to intervene, but was unsuccessful.

Exile
During this time, John was supported by a group of deaconesses led by Olympias. John wrote many letters and exercised considerable influence at Constantinople even from exile.  Seventeen of his letters to Olympias survive, but none of hers. To preempt further publicity, his captors forced him to Pontus. The journey on foot in bad weather led to his death on 14th September 407. Seven years later he was posthumously rehabilitated. 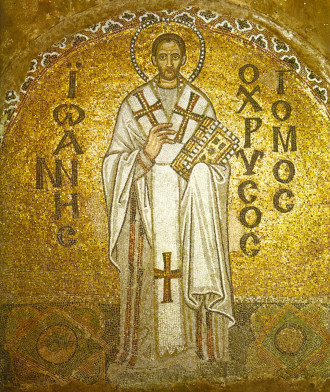 His legacy
John’s eloquence as a preacher earned him the name Chrysostomos ( “the golden-mouthed”). He lived, suffered and died for ideals that were opposed to the ruling society of his day. The themes of his homilies urge greater care of the poor and giving up popular pagan amusements.

Liturgy
He revised the prayers and ritual of the liturgy of the Eucharist. The Eastern Church today still celebrates the form of the Eucharist he gave it, The Divine Liturgy of St John Chrysostom.