Summary: St John Baptist de la Salle, priest. Born at Rheims (France) in 1651. Died at Rouen on this day in 1719. Ordained to the presbyterate in 1678 after seminary studies at Saint Sulpice in Paris. Pioneered schools for poor boys and the working classes, the training of teachers, and the care of disturbed children. Despite much internal conflict and external opposition, he formed his companions into the Brothers of the Christian Schools.  c/f  Australian Catholic lectionary 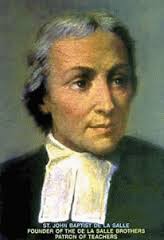 St John-Baptist de la Salle founded an order of teaching brothers for the underprivileged: the order also specialised in teacher-training and in the care of reformatories; today there are 5,000 brothers in 80 countries worldwide. Patrick Duffy outlines the saint’s life.

From a wealthy family
Born into a wealthy family at Reims in northern France, John-Baptist studied there as a boy. He received the clerical tonsure at 11 and became a canon of the cathedral at 16. He studied at the Seminary of St Sulpice in Paris, was ordained a priest in 1678 and received his doctorate in theology two years later.

A new concept
While he was serving as a priest at Reims, a layman, Adrial Nyel, who had opened free schools in Rouen asked John-Baptist to help do the same thing in Reims. Thinking at first this entailed just a marginal supervisory involvement, John-Baptist soon found that the teachers were not fully competent and decided to take them into his own house to train them. This caused a rift with his family. Two of his brothers left the house and five of the teachers left as well. But it was the beginning of a new concept of a community of men devoted to Christian teaching.

An apostolic religious order despite opposition 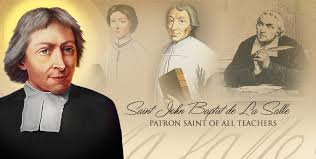 Soon John-Baptist and twelve others took simple vows of obedience and became an apostolic religious congregation known as “the Brothers of the Christian Schools”. Teaching was to be their way to attaining holiness. They started a training college for teachers in Reims in 1686. John-Baptist encountered opposition especially from those who felt that the poorer classes should not be educated beyond manual skills and from church authorities who disliked his new form of apostolic religious life.

No priests
Since he was himself a priest, John-Baptist thought it would be good to have priests in the order, but when the first candidate, Brother Henri L’Heureux, was ready for ordination, he suddenly fell sick and died. This upset John-Baptist, and on mature reflection, he decided not to have priests so the brothers could more easily live in humility and simplicity.

Expansion to Paris
The congregation expanded to Paris and Saint Denis. Here some of the Irish who had fled with King James II to France asked the Brothers to educate their children and they expanded into secondary education. In this way John-Baptist’s ideas and methods spread more widely. 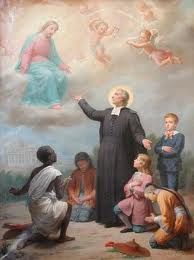 Methods
De La Salle believed it was better to instruct his pupils through the vernacular (French) rather than through Latin, because in this way they could learn to read more easily. He also adopted the “simultaneous method” where pupils were graded according to their capacity, putting those of equal attainment in the same class, giving them the same text-books, and requiring them to follow the same lesson under one and the same teacher. Both these developments were innovations in educational method at the time.

Deposed for a time
Opposition within church circles led to John-Baptist being deposed by Cardinal Louis-Antoine de Noailles, archbishop of Paris, for a time and replaced as superior in 1702, but this was allowed to lapse through intense opposition to it by the brothers themselves. However, some confrères did leave the order. Eventually at a chapter held in 1717 his trusted colleague Brother Barthélemy was elected superior and John-Baptist resigned. 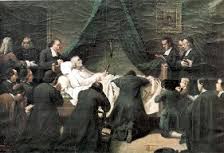