Summary of Joan of Arc:  a simple but intelligent girl who faithfully followed a call – to help restore the monarchy in France and expel the English – a call which she saw as coming from God. Despite many obstacles she carried it through faithfully to the end. She was tried for witchcraft and heresy,  executed and burned at the stake. Later she was declared innocent in a retrial in 1456, but only in 1920 was she finally canonised. 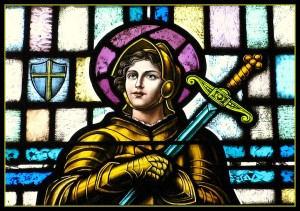 Jeanne la Pucelle, “Joan the Maid”, was born in 1412 at Domremy, in the Vosges region of Lorraine, north-eastern France. There was little to distinguish her as a child from other children of the region. Illiterate but highly intelligent, from the age of fourteen she began to experience inner promptings or “voices” telling her she had a mission to win back the French kingdom from the English. However, she kept these voices secret for five years until in January 1429 she persuaded a captain of Vaucouleurs to give her an escort to go to meet the Dauphin (the king’s son and heir) at Chinon.

The historical period
Previous to this in 1415, King Henry V of England had scored a significant victory over the French army of King Charles VI at the battle of Agincourt. Following further reverses, France agreed at the Treaty of Troyes (May 20, 1420) that the English King Henry would marry the French king’s daughter, Catherine of Valois, and that the French throne would pass to England on King Charles’s death, thus bypassing and excluding the Dauphin, the French king’s son Charles, who was then seventeen years old.

However, when both Henry V and Charles VI died in 1422, Henry’s brother, John of Lancaster, first Duke of Bedford, acting as regent for his nephew, Henry VI, then only nine months old, undertook to complete the conquest of France by tracking down the Dauphin, who had taken refuge beyond the Loire. He then laid siege to Orleans, which by its strategic location north of the Loire made it the last obstacle to an assault on the French heartland. This is the background to the events which led to Joan’s decision to follow the voice she was hearing inside her and take steps to implement her mission. Much of northern France as well as Burgundy was now in the hands of the English. 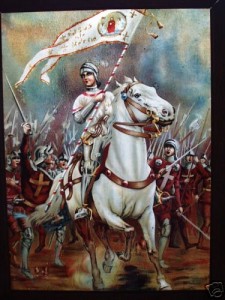 Joan impressed the Dauphin at their first meeting, but he had theologians interrogate her for three weeks at Poitiers to reassure himself about her good standing. She was then given a suit of armour and a staff of attendants and joined the French army at Blois. Ten days later they had raised the seige of Orleans. Whether she took part in strategic planning is uncertain or was there as a staff bearer, there is no doubt that her presence at the head of the army and her belief in her mission strengthened the morale of the soldiers. A wound in her breast from an arrow only served to enhance her reputation. A victory followed at Patay, Troyes surrendered and Joan persuaded the Dauphin to be crowned as King Charles VII of France at Rheims, with Joan standing at his side with her standard.

Capture, trial and execution
Although keen to press on to Paris, the French did not maintain their advantage and she received a royal message to withdraw. She went to Compiègne, where the Burgundians captured her and sold her to the English. The English attributed her success to witchcraft and wanted her tried and condemned by the Church. Charles made no attempt to save her. Imprisoned at Rouen, the seat of the English occupation government, she was tried for witchcraft and heresy at an ecclesiastical court of the bishop of Beauvais, Pierre Cauchon. The charges against her were that she was in league with the devil, wore men’s clothes and disobeyed the Church.

Although ostensibly a church trial, in fact it was politically motivated. Bishop Pierre Cauchon of Beauvais, under whose jurisdiction it was conducted, was an English partisan. It was financed by the English. Joan’s request to have “ecclesiastics of the French side” at her trial was refused. 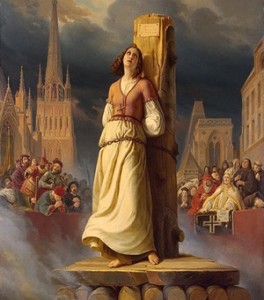 Although she answered her accusers with shrewdness and without fear, refusing to betray her conscience, she was found guilty. She was handed over to the civil authorities and burned at the stake in the market-place of Rouen on 30 May 1431. They reduced her body to ashes and threw them on the Seine. She wasn’t yet twenty.

Retrial, rehabilitation and canonisation
About twenty years later Joan’s family asked for the case to be re-opened. Pope Callistus III (1455-8) appointed a commission, which after carefully examining all aspects of the case, quashed the original verdict and declared her innocent (1456). Another four hundred and fifty years were to elapse before she was beatified in 1910 and canonised in 1920. However, the Church had not claimed her as a martyr for the faith. It is her integrity and simple faith that we admire: like Mary, she answered a call she saw as coming from God and she followed it to the end.