Summary: St Jerome, Priest, and Doctor of the Church. Born about 340 at Strido on the Adriatic coast;  baptised in Rome while studying the classics, became a hermit in Syria for a time and was ordained a priest. He began work on a new Latin translation of the Bible. Finally settling in Bethlehem where he founded monasteries, he devoted himself to studying the Scriptures, writing, and teaching.  He is remembered for his asceticism and scholarship and his incomparable service to the word of God.

Jerome, along with Ambrose, Augustine and Gregory the Great, is 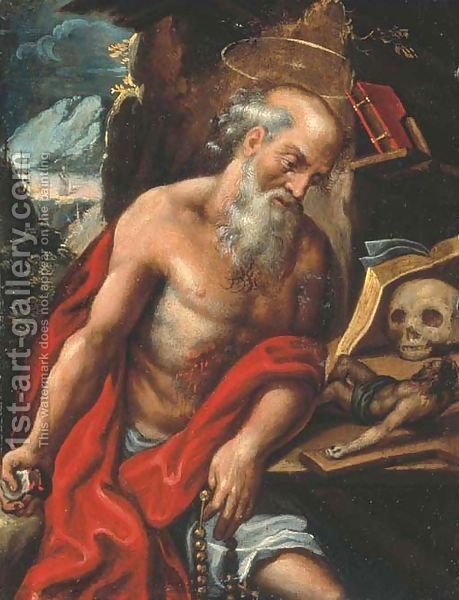 one of the four Latin Doctors of the Church. A brilliant scripture scholar, a passionate ascetic, a   sarcastic wit and an open friend with women – he makes an intriguing study as a saint.

Early life
Jerome was born at the Dalmatian town of Stridon, near modern Ljubljana, Slovenia. His education, begun at home, continued in Rome where he studied grammar, rhetoric and philosophy. He was baptised there in 366. While at Trier in Germany, he felt the attraction to be a monk and for some years was linked to an ascetic elite near his home.

At Antioch in Syria
When the group disbanded, he travelled to the east where he was the guest of Evagrius of Antioch. It was here he had the celebrated nightmare where he found himself facing the judgment seat. On being asked about himself and replying he was a Christian, he heard the reply: mentiris; Ciceronianus es, non Christianus (“You lie; you’re a Ciceronian, not a Christian).

At the Council of Constantinople
He then went as a hermit to Chalcis in Syria (375) where he studied Syriac, Greek and Hebrew. He returned to Antioch where he was ordained (378) and engaged in scripture studies and in translating the Ecclesiastical History of Eusebius into Latin. He accompanied the bishop Paulinus to the Council of Constantinople and stayed there to study Scripture under St Gregory Nazianzen.

To Rome as secretary to Pope Damasus
In 382 he accompanied Bishop Paulinus to Rome, where Pope Damasus (366-384) engaged him for three years as his secretary and asked him to make a Latin translation of the Bible.

Jerome was critical of the Roman clergy and of lax monks and nuns. He had a bitter temper and a sarcastic wit, so he made many enemies. He practised asceticism himself and he held classes for a monastic-minded circle of noble Roman widows and virgins, Marcella, Paula and her daughter Eustochium.

To Bethlehem
Not surprisingly, after Pope Damasus’s death in 384, a storm of criticism and calumny caused Jerome to leave Rome. Eventually, the summer of 386 found him settled at Bethlehem, where Paula had gone and set up a hostel for pilgrims, a convent for women directed by herself and a monastery for men under Jerome. 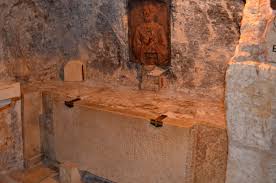 Literary output
Jerome lived at Bethlehem – except for brief journeys – until his death. He carried on the literary tasks of bible translation and commentary, as well as controversial theology, ascetical works and letters. His most important work was his translation of the Bible into Latin, which came to be known as the Vulgate and has remained the accepted Latin version up to our own time. (picture above right shows where Jerome , worked on the vulgate and died.)

Death and evaluation
Jerome died in Bethlehem on this day in 420 and was buried under the Church of the Nativity there, close to the graves of Paula and Eustochium. Later his body was translated to the Basilica of St Mary Major’s in Rome. Jerome’s great gift was scholarship and devotion to the Church. And for this he was made a saint and doctor of the Church. His wicked temper, while not excusable, humanises the passionate ascetic. Like the rest of us, he had faults he couldn’t overcome.