Summary: Three times a year – on his feast of St Januarius, on the day of the translation of his relics and on the day he saved Naples from an eruption on Mount Vesuvius – the liquefaction of his blood of  is said to occur. 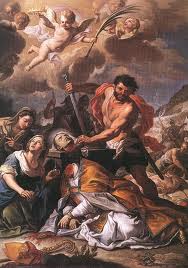 Januarius was a 4th century bishop of Beneventum, who with his companions suffered martyrdom in the persecution of Diocletian at Naples. It is said he was first thrown into a fiery furnace and remained unscathed. Then thrown to the lions in the arena, they refused to touch him. Finally he was beheaded. The Christian women collected his blood in a glass vial and placed it in his tomb. 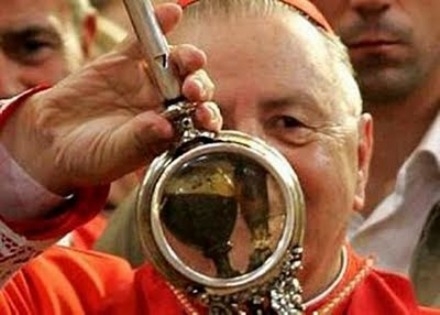 1389 and since then countless pilgrims have witnessed this unexplained occurrence. The phenomenon has been the subject of intense dispute and scientific examination for centuries. The Church has never made any official declaration that it is a supernatural event. But even sceptics admit that something happens.

What is involved is a dark solid mass held in a glass vial kept in the treasury chapel of Naples cathedral. Three times a year a priest brings it out with a reliquary said to contain the saint’s skull, holds it up and turns it as the people pray. After a period of anything from two minutes to an hour, it appears to become red and to bubble – or not. If it does, the priest proclaims the miracle and all sing the Te Deum in thanksgiving. If not, this is taken as a kind of prophetic warning.