Summary of St Jane Frances de Chantal:  Jane was a happily married woman with four children whose husband died in a hunting accident. Helped by St Francis de Sales, she founded the Order of the Visitation, adapted for widows and women like herself. She was also a friend of Ss Francis de Sales and Vincent de Paul.

The writer of this piece is Robert Ellsberg.

“Sometimes put yourself simply before God, certain of his presence everywhere, and without any effort, whisper very softly to his sacred heart whatever your own heart prompts you to say.”  …. St Jane

Husband was killed in a hunting accident
Jeanne de Chantal was born into a wealthy family in Dijon, France. At the age of twenty she married a baron, Christophe de Rabutin. It was a happy marriage, despite the fact that three of their seven children died in infancy. In 1600, however, after eight years of marriage, her husband was killed in a hunting accident. In the following years, as she struggled with her children’s upbringing, dependent on her in-laws for support, her heart increasingly turned to the attractions of religious life. She vowed that she would never again marry.

Meets Francis de Sales
In 1604 she heard a sermon preached by the bishop of Geneva, Francis de Sales. This was a turning point in her life, the beginning of a deep spiritual friendship and partnership that would advance them both along their respective paths to sanctity. Francis was already renowned as a preacher and spiritual director. Rather than present the spiritual life as something fit only for monks and nuns, he tried to present a spirituality accessible to everyone and capable of being lived out in the world. Jeanne immediately responded to his message and asked him to become her spiritual director.

Order of the Visitation of Mary 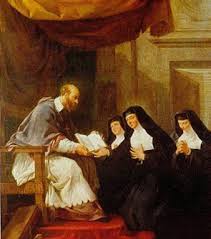 After several years, in 1610, the two of them founded the Order of the Visitation of Mary, a congregation dedicated to prayer and works of charity. Their original intention was that the order would be adapted for widows and other women who, for reasons of health or age, could not endure the rigours of enclosed life. But the plan met with such sharp disapproval from ecclesiastical authorities that in the end Jeanne consented to accept enclosure. Jeanne’s daughters were married by this time, but her fifteen-year-old son, Celse-Benigne, resisted his mother’s plan to enter religious life. He was the occasion of a melodramatic test, for which Jeanne is especially remembered. Laying his body across the threshold of their home, he implored her not to leave. Without hesitation she stepped over him and proceeded on her way.

“Be gentle with yourself”
Jeanne proved a gifted superior, combining superb administrative skills with a profound instinct for the spiritual life. “No matter what happens,” she wrote, “be gentle with yourself.” In her lifetime the order grew to include eighty communities in several countries. Along the way she encountered persistent criticism from church authorities as well as internal tensions within the congregation. The order attracted many women from an aristocratic background who found it difficult to adapt themselves to the spirit of poverty and obedience. Jeanne weathered these and greater trials, including the death of her son in war and, later, in 1622, the passing of her beloved friend, St. Francis de Sales.

“Her face never lost its serenity”
She lived on for almost twenty years, dying in 1641 at the age of sixty-nine. Another holy friend, St. Vincent de Paul, was moved to observe: “She was full of faith, and yet all her life long had been tormented by thoughts against it. . . . But for all that suffering her face never lost its serenity, nor did she once relax in the fidelity God asked of her. And so I regard her as one of the holiest souls I have ever met on this earth.”

This article first appeared in Blessed among all women: women saints, prophets and witnesses for our time by Robert Ellsberg.  Published by Darton, Longman and Todd Ltd.  www.darton-longman-todd.co.uk