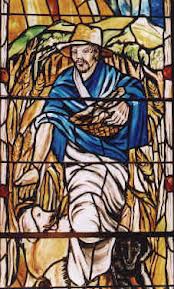 Summary: St Isidore the farm-labourer is an example of a lay saint of humble origin who attained a life of sanctity through doing ordinary work extraordinarily well and who posthumously became famous. His emblem is a sickle.

Farm-labourer
Born of devout parents, Isidore was named by them after St Isidore of Seville. He worked all his life as a farm-labourer for the same farmer, John de Vargas, at Torrelaguna, outside Madrid, Spain, the city of which he is now the patron saint.

His wife, (St) Maria Toribia
He was a model worker, a kind neighbour and a most devout Christian. His wife, Maria Toribia, resembled him in character and is popularly looked upon as a saint in Spain. They had a son, who died young; after that they live together as brother and sister.

Reputation for holiness and miracles
Isidore would rise early to visit a church and he prayed for long periods while he was guiding the plough. He would spend his holidays on visits to local shrines. One story about him is that his employer, John, who had accused Isidore of arriving late for work, had a vision of a second team of white oxen led by angels ploughing alongside Isidore. Another story tells that while Isidore was giving half of a bag of corn he had on his back to the birds, his yield of flour kept miraculously increasing, 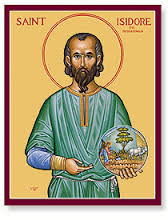 Miracles after his death and canonisation
Even after his death, stories of miracles continued. He is said to have guided King Alphonsus of Castile to make a surprise attack to defeat the Moors. In 1615 King Philip III of Spain was cured of mortal fever through bringing the body of St Isidore from the Church of St Andrew, Madrid, into the king’s room. Because of this, King Philip then petitioned the Holy See for his canonisation. This was done without delay and he was included along with three other famous Spanish saints – Ignatius Loyola, Francis Xavier and Teresa of Avila – in 1622. His incorrupt remains lie in the Church of St Andrew, Madrid. In art, St Isidore’s emblem is a sickle.