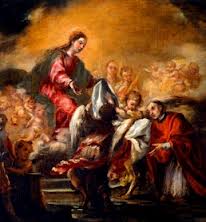 Summary of St Ildephonsus of Toledo, abbot and archbishop, is depicted in art receiving a chasuble from Our Lady (image). His career shows the growth of Christianity in Toledo, Spain, at the beginning of the seventh century.

Early life
Ildephonsus is a Gothic name (Hildefuns, which later evolved into the Spanish Alfonso). He was a Visigoth, a tribe of Germanic peoples who came down into Spain in the sixth century. He was born of a noble family in Toledo, Spain, then the capital of the Visigoth kingdom. He was probably educated, at least in part, by St Isidore of Seville (560-636), the encyclyopedic writer with a reputation of being the greatest scholar of the Middle Ages. His youth was a time when Christianity rapidly developed in Spain. In 589 Recared, the King of the Visigoths, converted his people from Arianism to Catholicism and Ildephonus’s uncle Eugenius became archbishop of Toledo.

Benedictine monk and archbishop
Ildephonsus became a Benedictine monk at an early age at Agalia near Toledo and became abbot there in 653. In that capacity he attended the Councils of Toledo in 653 and 655. Elected archbishop of Toledo in 657 in succession to his uncle, he continued the tradition of learning he inherited from St Isidore of Seville. 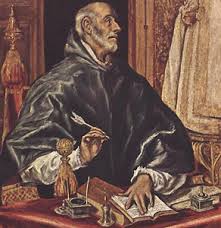 Ildephonsus of Toledo wrote a treatise entitled On the condition of baptism, which is one of the best sources for the practice of the catechumenate and the process of adult initiation in Spain. A second book, entitled On the journey in the desert, treats of the spiritual journey of the ordinary baptised lay person after baptism.

Another important work, Concerning famous men (“De viris illustribus”), contains short biographies of the earlier bishops of Toledo and is an important source for the history of that city in the sixth and seventh centuries. Its purpose seems to have been to promote the standing of Toledo in the Spanish Church.