St Hilary was a bishop at Arles in France, near the mouth of the River Rhone. The monastery on the island of Lerins, where he received his education, is said to have influenced the early Irish church, and there is a tradition that St Patrick received some of his formation there. Hilary got into trouble with Pope St Leo the Great for acting beyond his powers ultra vires. 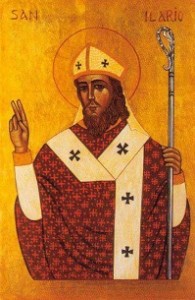 As a youth Hilary, though still a pagan, entered the island abbey of Lérins (opposite present-day Cannes) which had been founded by his relative Honoratus. Here he had an education in rhetoric and when he became a Christian, he joined the ranks of the monks. When Honoratus became bishop of Arles in 426 Hilary accompanied him to that city.

Bishop of Arles
Honoratus died after three years, and Hilary went back to Lerins. But messengers followed him to tell him he had been chosen as bishop of that city. Somewhat like St Augustine, Hilary organised his cathedral clergy into a monastic community, himself taking part in manual work and helping the poor. 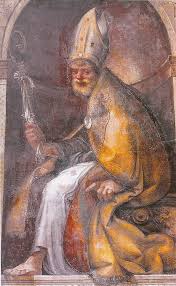 Hilary was a Sardinian who had joined the Roman clergy, and had been sent by St. Leo as one of the papal legates to the council at Ephesus in 449.

Was he a metropolitan?
Believing that the authority of a metropolitan had been given to the predecessor of Honoratus, Proclus, Hilary deposed Bishop Chelidonius of Besançon for ignoring his primacy. Chelidonius appealed to Pope Leo in Rome, and was reinstated. Leo withdrew Hilary’s jurisdiction as a metropolitan, asserting – with the approval of the emperor Valentinian III (425-455) – the primacy of the see of Rome over the Gallican church: ut episcopis Gallicanis omnibusque pro lege esset quidquid apostolicae sedis auctoritas sanxisset (“that the authority of the apostolic see must sanction whatever is to be the law for the Gallican bishops”).

Death and writings
Hilary died in 449. He wrote a Life of Honoratus, which survives, along with some letters and some poetry. A poem, De providentia, attributed to him, is sometimes included among the writings of Prosper of Aquitaine.

The island of Lerins
Lerins was an important influence on the Irish church, with a tradition that St Patrick received at least a part of his formation there. After World War II, the Cistercians re-opened a monastery on the island, which remains to this day.