Summary: Pope St Gregory VII was born about 1020 in Tuscany (Italy); died in exile at Salerno on this day in 1085. He served in important positions under several popes and briefly was a monk of Cluny. Elected pope in 1073 and campaigned strenuously for the reform of the Roman Church and for its freedom from civil powers. Noted for his devotion to the Church in Rome and for the reform of clerical and monastic life and of Church organisation. 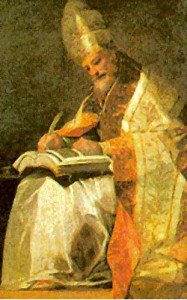 Pope Gregory from 1073 to 1085,  “was probably the most energetic and determined man ever to occupy the See of Peter and was driven by an almost mystically exalted vision of the awesome responsibility and dignity of the papal office” (Eamonn Duffy, Saints and Sinners: A History of the Popes, p. 121).

A disciple of Pope Gregory VI
Born at Sovana, a small town in southern Tuscany, the son of a blacksmith, and was christened Hildebrand. He was educated in Rome by the archpriest John Gratian who in 1045 became Pope Gregory VI. However, because of a financial deal involved in getting rid of his corrupt predecessor, Gregory was deposed in 1046 by the reforming German king and Holy Roman Emperor Henry III and went into retirement in the Benedictine monastery of Cluny, France. Hildebrand went with his master into exile at Cluny and spent three years there as a monk.

Ambassador of four popes
However, he returned to Rome in 1049 to serve the newly elected Pope St Leo IX as papal treasurer. Hildebrand became a deacon and then prior of the monastery of St Paul’s, Outside the Walls and was an assistant to a major influence on the next four popes, all of whom were reformers. He was also successful in various ambassadorial roles. On the death of Pope Alexander II (1061-73, he was elected pope by popular acclaim by the clergy and people of Rome. He still had to be ordained priest and bishop before he could be made pope. 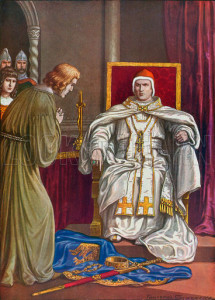 Taking his name from his mentor Gregory VI, Gregory VII immediately set about cleaning up the abuses of simony, clerical concubinage and lay investiture. He demanded that bishops take an oath of obedience to him and threatened those who wouldn’t carry out papal decrees. Over lay investiture he faced opposition from King Philip I of France, William the Conqueror of England and the young King Henry IV of Germany. Henry, whose father had appointed bishops and popes at will, resented the brusqueness of this new pontiff and gathered “his” bishops at Worms and insisted Gregory be deposed. But Gregory then excommunicated Henry and all the bishops collaborating with him and absolved his subjects from allegiance. Ecclesiastical support for Henry cracked and in 1077 he had to travel to the house of Matilda of Canossa in Italy where Gregory was staying and there he begged the Pope’s pardon and absolution. Gregory left Henry standing in humiliation for three days in the snow before eventually granting him pardon.

Pyrrhic victory and death
But Gregory’s victory was short lived. Henry rallied his forces and in 1080 invaded Italy, captured Rome, declared Gregory deposed. He installed an anti-pope Guibert of Ravenna as Clement III. Gregory took refuge in Castel Sant’Angelo, invited in the Normans under Robert Guiscard to rescue him. However, the Normans behaved so badly in Rome that the Romans turned on Gregory and forced him to retire first to Monte Cassino and then to Salerno south of Naples where he died. His last words were famously an adaptation of Psalm 44 (45) verse 7: “I have loved justice and hated iniquity; therefore I die in exile”.

Papal claims
Gregory’s pontificate represents a strong staking out of the papal claim of power over the secular world and though he achieved little, the spirit of papal reform continued and the papacy never receded from its claims to freedom from secular and political control in spiritual matters. From this time on also the pope began to be presented not just as the vicar of St Peter, but as “the vicar of Christ himself” (Innocent III 1198-1216).

His influence
Gregory’s beatification (1585) and canonisation (1605) took place at a time when the papacy was in conflict with secular powers – Queen Elizabeth I and James I in England. His feast was extended to the universal Church in 1728, causing some fury among proponents of Gallicanism in France. 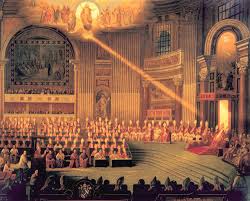 He was later seen as a precursor of Vatican I with its definition of the doctrine of papal infallibility. One could perhaps be forgiven for detecting a hint of spin or ideology in his promotion, but the tyrannies of the 20th century bear out the value of his insistence on the freedom of the Church in speaking out on spiritual matters.