Summary: St Gobnait is one of Co. West Cork’s best loved saints  but only traditions surrounding her life survive today 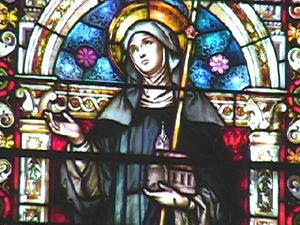 The image (left)shows a detail of the St Gobnait window by Harry Clarke in the Honan University Chapel at University College, Cork.

Local traditions connect Gobnait with bees, with Ballyvourney, Co Cork and with care for the sick. It is a happy coincidence that her feast is on World Day of the Sick, 11th February, the day Our Lady appeared to Bernadette at Lourdes.

There are few historical sources for the life of St Gobnait.

Patrick Duffy summarises what the traditions are about her.

Early life
Gobnait is said to have been born in Co Clare. In her youth she went to the Aran Islands to study monastic life with St Enda. There is a church dedicated to her, Kilgobnet, on Inisheer. An angel told her that this was not to be the place of “her resurrection” (death) and that she should tour Ireland until she found a place where she found nine white deer grazing. On her travels she is said to have founded churches at Dunquin in Co Kerry and Dungarvan in Co Waterford. 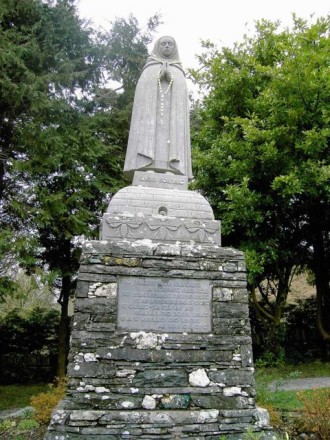 Ballyvourney and bees
But it was at Ballyvourney, Co Cork, that she eventually found the nine white deer grazing. Here she founded a monastery with the help of St Abban. Famous among the miracles of Gobnait’s prayer was the stopping of a pestilence by marking off the parish as consecrated ground. She is also famed for her cultivation of bees and a story relates how she routed an enemy by loosing her bees upon them.

Patron of ironworkers
“That Gobnait herself was originally a patron of ironworkers is indicated by the implications of her name, which is based on the hypocoristic (=pet-name) Gobba, from gabha, ‘smith’. Excavation at her church in Ballyvourney yielded considerable evidence of ironworking on the site” (Pádraig Ó Riain, A Dictionary of Irish Saints (2011).

Associations
There is a tradition that in 1602, when after the defeat at Kinsale and the destruction of his castle at Dunboy, Donal Cam O’Sullivan Beara was retreating with his soldiers – along with their women, children and servants – to the territory of O’Rourke of Breifne, they stopped at Ballyvourney to pay homage to the memory of Gobnait.