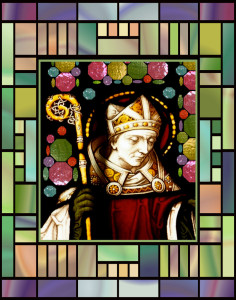 Patrick  Duffy traces the story of the saint.

Patrick  Duffy traces the story of the saint.

A monk at Autun in Burgundy
Born in 496 near Autun (a Roman city originally called Augustodunum after the Emperor Augustus) in Burgundy and educated at Avallon, Germanus became a monk early in life and after fifteen years was ordained a priest. The local bishop appointed him abbot of the monastery of St Symphorien in Autun.

Frankish kings in Burgundy
At that time the Frankish king Clovis (466-511), under the influence of his wife Clotilde, had become Christian and established his capital in Paris. From there he began to expand into Burgundy and towards the south-east at the expense of the Visigoths. It was Clovis’s grandson Theodebert (534-548) who eventually conquered Burgundy, but in accordance with a prediction by Germanus, met an early death.

Germanus becomes bishop in Paris
When Clovis’s son Childebert I (496-558) became Frankish king of Paris, he invited Germanus to a synod in Paris, at which the bishop there was deposed and Germanus appointed in his place. From then (555) on, Germanus had great influence over King Childebert. He in turn supported Germanus in building a cathedral (dedicated to St Stephen) and a monastery dedicated to St Vincent and the Holy Cross.

Excommunicates Charibert
Charibert, who succeeded Childebert, was not so favourable to the Church. He pillaged its property and led a dissolute life. He married two sisters at once, so Germanus promptly excommunicated him. 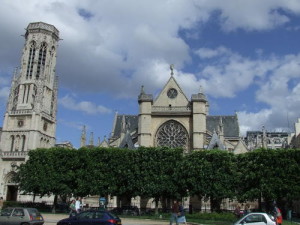 Death and influence
When Germanus died in 576, he was buried in the basilica he had built. Because of his reputation for holiness and for miracles it was then called St Germain-des-Près ((St Germanus-in-the-Fields). His relics, which had a prominent place in the church, were destroyed during the French Revolution. Today the tomb of philosopher René Descartes is located in one of the church’s side chapels. The area around the church in Paris is famous for its literary, artistic and student life. The football club won the European Cup Winners Cup in 1996, but haven’t figured as prominently in recent years!